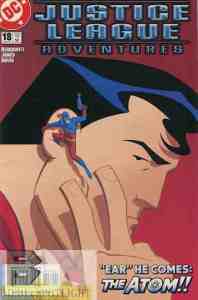 “If you’d clean these out once in a while I wouldn’t have to keep doing this.”

Flash, Batman, Hawkgirl, Wonder Woman, and J’onn wake up inside Superman’s head thanks to Ray Palmer, aka the Atom. He tells them that he was in a hurry because aliens have invaded Superman’s head and want to use him to get revenge on someone named Evano, who killed one of their exploration vessels. They eventually learn “Evano” was just someone named Evan who found the sub as a boy and thought the small ship was a toy submarine, unknowingly drowning the crew. The aliens drop their revenge and decide to take up the lost team’s exploration.

What they got right: This is a really good concept. The invaders aren’t evil so much as wanting to avenge their comrades on what they thought was a terrible murderer, and it was just an innocent child who didn’t know he killed a crew of explorers. While there was a way to tell the story without the Justice League I don’t think it would have worked nearly as well since they need a way to find Evano and learn his story and the League help bridge that potential gap in the story. It does make for a good short story on it’s own, but the art is good too.

What they got wrong: Evan was six years old when he accidentally drowned the explorers. He looks nearly thirty now. That means it took roughly twenty-four years to put this plan in motion? What were they doing all this time? And did John Stewart find Evan’s last name confusing? I don’t know anyone named Offenhauser either but…eh, I’m probably reading too much into the question mark.

Recommendation: While not a must-own issue it is a really good one that recommend checking out if you have the chance. It’s quite good.