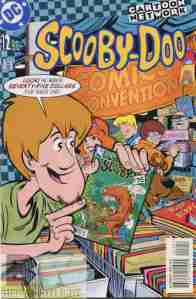 Wishful thinking. It isn’t even worth that in 2020.

The first story finds the gang attending a comic convention where someone tries to steal a rare comic. Yeah, it’s not a new story for the gang (at least it isn’t Roswell again) but the motivation is different. What gets me is that it isn’t much of a mystery, just Shaggy and Scooby using their comic story knowledge to uncover the villain’s process, which he got from a different comic book. And he only wants to steal the comic because so few people saw the story that he thought he could plagiarize it because he’s not very good at coming up with his own stories. Or crimes apparently. It’s not very interesting and I wonder if the writer was trying to take a shot at someone. Does the name “Murray Felton” sound close to the actual name of a comic writer Kraiger might be accusing?

The backup this week has Velma’s game designing aunt curious about the lawn gnomes in her yard moving around and strange jewelry left on her doorstep each morning. It’s also not much of a mystery, only this time Velma just comes up with the right solution out of nowhere. Also, I’m pretty sure you can’t tap underground phone lines that way to break into a modem signal to steal game designs being sent by e-mail (and at 1990s speed that must take so long it would be easier to mail the disk through regular mail) but I haven’t confirmed that with my computer expert friend. I know she ain’t so rich from game design alone that she has room in her house for a full-sized bowling lane.

Overall, this reminds me of the Archie run. The mysteries are weak and there’s nothing for the audience to solve. At best the first story came up with a new motivation and even that’s lame. This is really not an issue worth tracking down.