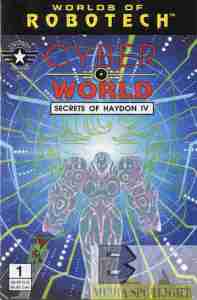 I didn’t know the ZX Spectrum has a Robotech game.

On Haydon IV the Regis has the rest of the surviving Praxians brought to her, but given the machine world’s defenses do not allow any kind of violence there’s not much she can do with them or to torture the Tirols from the Masters’ embassy for information. She does learn about The Awareness, a repository of knowledge anyone can interface with. Doing so she finds a virtual clone of Zor. (The man keeps this up he’ll have more clones than Peter Parker.) Unfortunately he was created while the SDF-1 was still in orbit and the Regis can’t learn where it went to. Data-Zor does tell her that everything that’s happened thus far is part of a plan by Haydon himself, creator of the planet (and I’m guessing at least five others), so she digs further into the matrix, confirming Data-Zor’s story. She also learns that Haydon didn’t leave but continues to exist inside the computer (unless it’s another virtual clone). She tries to get Haydon to explain his actions but he says it is not yet time and sends her back out to find the protoculture matrix.

What they got right: The Waltrips do an amazing job depicting a virtual world in a black & white comic. Even my usual complaint about DeLepine’s text boxes for special effects don’t look as bad. They’re also building a further mystery into the Sentinels timeline and while I’ve read a few people aren’t happy with the accelerated connection Haydon has to Robotechnology and the various races of the local group I find it rather fascinating lore-wise.

What they got wrong: Then again I’m not sure that Macek was planning something this deep with Haydon IV but I don’t have access to his notes to be sure. Granted it would partially explain why the Haydonites become the villains of Shadow Chronicles, depending on what Haydon’s endgame is or what’s considered canon to Harmony Gold since neither the Sentinels comics nor the novels are so considered but Shadow Chronicles is. It’s getting harder to find a continuity that isn’t a mess these days without a multiverse to make it all canon. Good going Transformers I guess. There is also a page where the dialog is a bit confusing as to whom says what when, lest you think I’m giving Alphabet Soup a pass.

Recommendation: Whatever the Sentinels’ place in canon is this is a really fascinating story. If you’re following the Sentinels series this is one to definitely check out, though if you aren’t (and you should be) the comic won’t mean much to you.