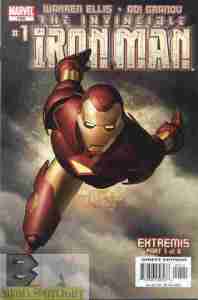 A biography film producer meets with Tony to discuss his life, slam him for making weapons, and basically update his origin to match the sliding timeline, placing his origin now at the Gulf War. (I wonder how Wong Chu, the Vietnamese warlord, fits into that?) However, the main story involves the theft of something called Extremis, which is injected into a man among the theives and slowly mutates him. Meanwhile their man in the inside kills himself. Maya Hansen, who works for the company behind Extremis, decides to call on Tony for help.

What they got right: Thanks to the sliding timeline they did have to update his origin, and it works well enough. On a technical lever the story is well told and the current crisis of this arc teased okay.

What they got wrong: I’ll get to my personal complaints in a moment outside of longtime readers knowing that I’m not a fan of the painted art style for sequential art. The facial expressions are never expressive enough. When Tony brings up the filmmaker’s movies not making an impact after the “intellectuals, critics, and activists” leave the theater the man’s response on his face doesn’t have the same impact as the dialog suggests. I also want to know when everyone forgot Tony was Iron Man because here nobody seems to know about it, or that Stark stopped making and designing weapons a long time ago. Tony’s personality doesn’t quite match up with him either. I also question how the panels are used to show off the art.

On a personal level that was part of the problem. I didn’t like the letterer’s attempts to make the credits look like credits of a TV show or movie. It looks weird in a comic book, even if it’s adapting an episode or film. The art is also very dark for my tastes. As a whole some panels are pretty good but again expressiveness plays poorly in this style and there aren’t a lot of backgrounds. This is also (and that’s not really Ellis’s fault here, though I’m not a fan of his darker writing personally) the second comic in a row I’ve reviewed where someone shoots themselves in the head. I guess the darker colors matches Ellis’s tone but it’s not what I personally want to see in a superhero comic, which is why I dropped this title in the first place. This comic gave me no reason to return. Later on I heard more about Extremis and the Extremis armor, which basically hid the yellow part of the arm in a liquid state inside his pores (gross) while a few of the red components were still extra pieces he had to put on, which just doesn’t sound that great to me. It’s too much work to try to make the armor more advanced when it just sounds lame to me. I have never liked this armor conceptually. I don’t mind change (his armor’s changed a lot over the years) but it has to be a good change and to me this isn’t.

Recommendation: As a critic I have few complaints outside of continuity errors and my stance on painted art comics. It’s a decent start for the story…but as an Iron Man comic I can’t really recommend it on a personal level. Nothing about it says Iron Man outside of Tony wearing the armor. Being a decent story doesn’t make it a good Iron Man story.