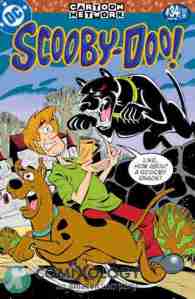 “I’d rather snack on Scooby! GRRRRRR”

“The Hound Of The Basket Cases”

“Return Of The King”

The first story is actually a pretty good mystery, and one without a jail-worthy villain. The gang investigates a family dealing with a supposed curse while also dealing with the father’s death and no inheritance. I really liked this one and it’s worth getting just for this story, depending on the back issue price if you go the physical route.

The second story however I can take or leave. Legend says Elvis Presley Stand-In #85 is going to appear in a certain hotel years after he disappeared. When he does he demands everyone stop dressing up as him and his niece has all likeness rights or they’ll all feel his wrath. It feels like an excuse to write a bunch of Presley parody lyrics. I was not impressed.

So the first story is good and the second is not. The first is enough to at least read this issue depending on the asking price. Only half the comic is good.