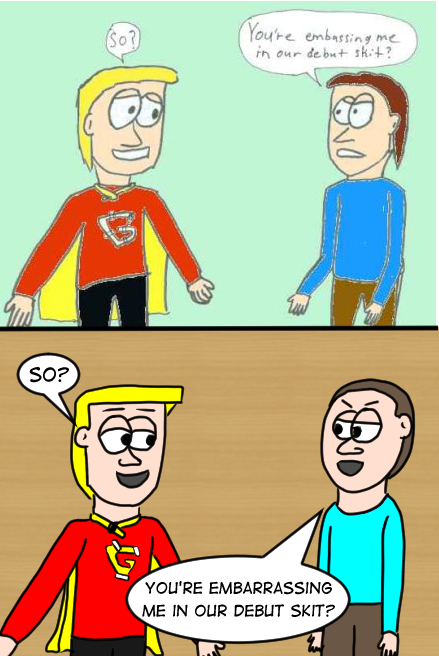 Usually I post the first comic, but last year I remade it to see how far I’ve come. And I’ve come pretty far since this comic began, even before I switched to digital art. Jake & Leon started as an experiment in an art style and then became the comic that opened my weekly comic reviews on Sunday. When I switched to daily reviews so I didn’t spend my Sunday writing a very long article I switched to a list of articles I came across that week I thought readers would find interesting…which I now also do daily but with the occasional video instead. So I just gave them the Sunday spot. It’s usually a quick and easy style to draw, though since this comic I’ve also improved on adding backgrounds and designing sets. This has also improved the comic.

Some days I rush more than others and it shows in the art but hopefully the comic does give someone a little smile, which I think we all needed more this year than last year. And that’s kind of a problem, too. While the comic’s year goes from October 26th to October 25 of the following calendar year, the majority of comics this year either surrounded the 2020 plague, the riots, or pushing back against all that with the longest story arc I’ve done for this comic, Herodude & Enemies #1. Still, before I begin year 12 I want to look back at how my 11th year was marred by 2020’s suckage and see if I can find some good strips that for one reason or another I found to be some of my favorites of the comic year.

The fact that I put this long into anything not forced upon me by the law is always amazing.

I’m still trying to figure out the right line thickness at each kind of shot (the closer I get, how much thicker should the lineart be?) but considering how terrible I am at milestones this comic worked rather well.

Paying a comic character is easy. If I try drawing money in real life though that will earn you prison time.

Last year I had Jake and Max, the cartoonists in the group, take part in the Art Soundoff challenge. While I’m not sure if I’ll do that again this year this comic pretty much explains what role Jake and Leon, our hosts and the first characters I created in this style, do in the comic. Although at the same time Jake’s perspective is the creator and Leon is the fan, while I serve the role of critic as the cartoonist.

I just now caught the typo and a goof in the background. This is also one of the best bits of advice I’ve done for Art Soundoff, and it was in the comic, though hopefully I have brought this up in the videos at least once.

No, I don’t care about the “no year zero” debate. If you don’t count the decade until next year it still applies.

In hindsight this doesn’t really bode well for the new decade, does it?

Plus Rise Of Skywalker has so many cuts from what I’ve heard you could make a box set of just this movie.

And at some point after this the Snyder Cut was officially announced. Leon’s comment still stands.

Or maybe Jim Lee remains sole publisher. Do we know he would change anything?

You’d think the shutdown would have allowed time to develop a course correct ala Rebirth but instead we get a cut-down version of 5G as Future State. So far it seems all they worked on was a new distribution system to get around the Diamond monopoly they helped start. Again, Leon’s comment still stands.

The strange thing is I’m not sure Mr. T himself would have been a fan of his depiction in some of these comics.

It made sense for me to us a Mr. T/Doctor Who crossover as both a fan and the fact that this is an old style of webcomic. And yes, as of this writing it’s still up there.

Then again there’s that whole not really existing thing.

We were only supposed to be shut down for a couple of months to give the hospitals a break and yet here we are months later still not open. It did lead a lot of people to start working from home which may change the way we do certain jobs in the future but my concern are for those who need to be out there. If they’re closed then they’re either going out of business or in trouble and if they’re necessary there was potential risk but even now with treatments discovered and talks of vaccines being ready there are other concerns. If this was the only issue 2020 dealt with it would be bad enough. This led to me showing what the rest of the cast was doing while stuck home, which is an okay story but I wasn’t planning to deal with it as long as I did.

Because someone was using the volleyball.

Even when the lockdown was altering the events of the comic I still tried to push back and move forward, like everyone else. That’s why I was able to come up with this gag, in a concept inspired by Texts From Superheroes. I figure everyone’s phone is a bit different so the look is based on whose phone this comes from. I’m still tweaking the look because this was the first one and I’ve only done a couple since. So if anything came out of this year was experimenting with a format I probably wouldn’t have thought of otherwise. I like that Fizzbin’s is loaded in the wrong direction, as for some reason I’m under the delusion that the image switches based on the phone. I don’t text much so I wouldn’t know. I think I made one for Beth as well, but she’s not old enough for her parents to let her text and this is probably mostly boring adult stuff off-panel.

Don’t worry. She has a food replicator and plenty of movies on her tablet.

I put extra effort into the fourth panel and I think it paid off. I probably should have used some time to fix Leon’s eyes in panel two but I’m still happy with this overall.

According to scientists zombies are impossible and Skynet is the dream. My money’s on the death bots.

Don’t worry, he was in the studio by himself because this needed the podium. This pretty much describes my thoughts on 2020.

He even gave him the quip to drop in with. How kind.

I ended up revisiting this joke at the end of the comic.

At least he was smart enough to realize his robots were no match for the hero instead of stay to see him perish.

I have a feeling all the superhero clichés will show up in future Herodude stories. That’s how you make deconstruction fun without ruining the superhero genre.

Storylines kind of dominated this year. I could post the entire Herodude story in one post, around 11 images, because I was really proud of it despite the missteps. All the stuff related to 2020 was me pushing back, so I’m happy I even got this many favorite comics out of year 11. I was hoping my first year post-anniversary would be better but life worked against all of us and I can only hope 2021 will be better. I also hope I didn’t just jinx it.