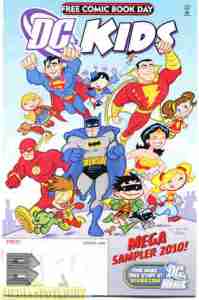 I gave this a quick go over during the 2010 Free Comic Book Day haul. Since that time I know at least two of the three stories in this comic ended up being reprinted in the comics they were based on. I’ll link to the review of those issues…or at least the two I have. While I was a regular reader of both Batman: The Brave & The Bold and Billy Batson & The Magic Of Shazam! I only have a couple of Tiny Titans comics and none of them had the story in this sampler.

Something has been stealing cows just outside of Fawcett City and leaving crop circles behind. Billy and Mary Batson investigate with reporter Helen Fidelity and her cameraman and happen to be there when the cows are suddenly lifted into the sky. Are aliens involved? The story continues in Billy Batson & The Magic Of Shazam! #17.

Tiny Titans: “Meanwhile at the North Pole near the Fortress Of Solitude” and “Field Trippin’ For Super Snow”

The first story has the Tiny Titans version of Supergirl and Superboy (at the time the Superclone version) throwing a birthday party for Superboy’s Bizzaro clone Match. (The Tiny Titans version of the DC Universe is a bit different.) Of course this version of Superman and Lex vie for the boy’s affection or something. The second story ties in as the Brainiac Club (including Wonder Girl, Brainiac-5, Kid Flash (based on Wally I think), and Psimon) are near the Fortress for a field trip and get invited by Supergirl to join the party. Continued in Tiny Titans #31

Batman: The Brave & The Bold: “Life On Mars”

A white Martian named Ma’alefa’ak has landed on Earth and plans to turn the people of Earth into the old Martian race, then lead them to conquer the universe. Only Batman and the Martian Manhunter can stop him. Landy Walker once confirmed this story was original produced for this sampler and it’s the only story in the book with a conclusion. Maybe because it’s the only story not written by Baltazar and Franco besides the DC Super Friends shorts. It would later be reprinted with a continuation in Batman: The Brave & The Bold #18, in which the baddie infiltrates Batman’s mind, causing him to seek help from Doctor Fate.

I’m pretty sure even the DC Super Friends section with the Riddler making jokes and Wonder Woman teaching about Tangrams are either reprinted or get reprinted elsewhere later. So really there is no reason to track this down unless you collect Free Comic Book Day specials.