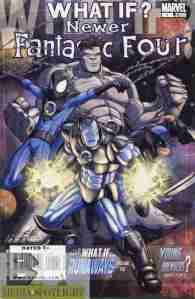 I think the colors actually work for them.

What If? Newer Fantastic Four

I have so many tabs open on my browser right now because apparently the story that forms this What If can be tracked to multiple realities according to the Marvel Database fan wiki. The story’s proper origins comes from Fantastic Four #347-349, in which a Skrull named De’Lita attacked the Fantastic Four and while imitating Sue Storm tricked Spider-Man, the Grey Hulk, Wolverine, and Ghost Rider into going on a mission. Why these four in particular had to be out of the way I don’t know. I only skimmed the story for the relevant information. In the various What If stories that spin off of this tale De’Lita ends up killing the FF for real (except for a de-Thinged Ben Grimm in at least one version, who becomes Franklin’s caretaker) and these three end up taking their place as the new Fantastic Four. Here’s where it gets annoying…for me to research. And since I did all this I’m putting it in here, though by the time I was half-way through this review I was starting to think I should have made this a Scanning My Collection article given how long it was. No, this isn’t the one I teased on Sunday.

Not that it lasts long. As Kang launches an attack on present Earth people start disappearing. It’s an alternate take on the Infinity Gauntlet storyline some of you only know from the Marvel Cinematic Universe. Thanos did his obligatory snap thing. Doctor Strange and the Silver Surfer arrive at the Baxter Building with Adam Warlock but the New FF (minus Ghost Rider, who was also snapped, and replaced with Iron Man) don’t trust him. As they discuss Thanos he brings them to his sanctuary and shows off his power, including splitting Bruce from Hulk, but Mephisto convinces him to not kill the FF so he sends them back to Earth for his own amusement. Wolverine notices Mephisto is manipulating Thanos. Back on Earth Adam has a plan but the heroes again don’t trust him because he won’t explain his plan, worried Thanos could read their minds. Annoyed at their attitude the three cosmic heroes decide to find someone else.

Using Reed’s tech they create devices they hope will bring Thanos down but Wolverine decides to join his side in the hopes of getting Jean as his girl. He shows Thanos what Mephisto has been doing and Thanos gets rid of him, appointing Wolverine as his new advisor. When Thanos takes down even the Celestials, Tony figures out how to manipulate Galactus’s armor while Spider-Man and Bruce connect it to the Negative Zone to boost its power. This still isn’t enough, but Wolverine was waiting to trick Thanos and remove the arm holding the Infinity Gauntlet. Thanos is turned into a farmer, the Watchers keep the Gauntlet and Infinity Gems, and Bruce stays with them as an honorary Watcher, finally free of the Hulk.

What they got right: The story itself is quite good. Iron Man makes a good fit for this group of the FF and around the time this came out, as mentioned in my original review, Tobin was killing it in Marvel Adventures: The Avengers after Jeff Parker left. It’s kind of fitting he followed up another Jeff Parker story. Bruce Banner gets a happy ending and while it doesn’t affect the story it was nice for him.

What they got wrong: As I also mentioned in the original review, it’s hard to believe these four could do what the whole of the Avengers struggled with in the Infinity Gauntlet story. I also noted that Ghost Rider did look out of place in the team but I wasn’t sure if the sudden Iron Man replacement was because of the movies at the time or Tobin’s preference. Now having done all that extra research above, why couldn’t this have taken place in the same universe as Parker’s story, or was that an error on the Marvel Database’s part? I’m not a huge fan of the stretched out characters either. It looks slightly better on the cover.

Something I forgot to mention in the original review were the back-ups. Here, Giarusso does a Mini-Marvels take on World War Hulk, moving the battle to a wrestling ring, with Uatu as the play-by-play and Korg doing color commentary. My favorite part is Sentry using that belt like a championship belt and how quickly everything is forgiven once it’s revealed who really blew up the ship. Also, the “Illuminati” are called the “Illuminators” here, which I’m kind of neutral on. Fun story.

There was also a running story in the What If? specials coming out around this time, “What If The Runaways Became The Young Avengers”. This was part six and frankly there isn’t enough here for me to judge because I have no clue what’s happening outside of Kang shows up again in this book and the art is actually better.

Recommendation: I didn’t collect all the What If? specials around this time but this was one I was glad to pick up, and I’m not usually into the Fantastic Four in any form. This is worth checking out if you come across it.