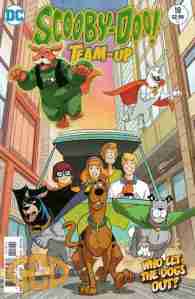 DC Comics (November, 2016, as reprinted in the digital version of the vol. 3 trade)

DC’s dog superheroes Krypto, Ace, and G’Nort come to Scooby-Doo for help because the all-dog planet where the Space Canine Patrol Agents are headquartered have been dealing with a ghost problem on top of their usual supervillain cats. Joined by Wonderdog, Scooby and the super canines learn that the “ghosts” are actually the planet’s previous superhero team, the Canine Commandos, trapped in another dimension along with their enemy Dogaton. The SCPA free the Commandos and Scooby ends up stopping Dogaton from escaping.

What they got right: Conceptually I like seeing Scooby teaming with the canine heroes of the DC universe. Most of the designs are good and Scooby gets to have a moment of bravery because he puts responsibility over his fears. Plus his usual status of being afraid so often ends up protecting him from the cat supervillain whose power is projecting fear.

What they got wrong: It’s the specifics where things go wrong. Among the Canine Commandos are Yankee Poodle, a character from Captain Carrot And The Zoo Crew, and unlike the other characters stands on two legs instead of four. (She also has doggie boobs, which makes more sense in the anthro universe of the Zoo Crew than a planet with four-legged dogs as the native species. No, we’re not questioning how they created this world. It’s one of those suspension of disbelief things.) Meanwhile Rex The Wonder Dog was an Earth dog from the 1950s and Bulletdog was the canine companion of Bulletman. What are they doing on an alien world? I don’t know the history of Nighthound or Robbie The Wonder Dog, but the SCPA (yeah, guess what that’s poking fun at–personally I prefer the Dog Stars from Krypto The Superdog) doesn’t quite match up with what little I know of them. There are a few missing that were even in Krypto’s TV show and I’m not sure the designs match their original incarnation. Also I kind of wish Dynomutt was actually in the story instead of just being referenced a couple of times. I know he’s Hanna-Barbera but so is Wonderdog, even with the DC ties.

Recommendation: This one has a great concept but the end result is a bit overdone on the fluff thanks to too many characters, and some questionable adaptation. Unless you really want to see DC’s hero dogs it’s not a must-read.