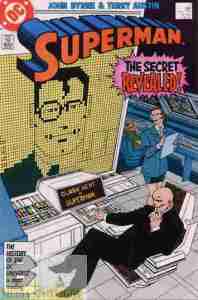 Even in 1987 you’d think Lex could afford a monitor with better graphics.

Seeing images of Lana at various Superman sightings tied with what he already suspects is a connection between Clark Kent and Superman, Luthor tries to learn all he can about both. He sends thugs to Smallville to collect anything the Kents have on Superman as well as Clark’s own history, but as the drug Ma and Pa they stumble upon Lana and kidnap her as well. After torturing her they let her go, knowing she’ll go to Clark and that will bring Superman. Superman confronts Lex but he has a piece of Metallo’s Kryptonite (not caring that removing it will kill Metallo) made into a ring. With no way to connect Lex to Lana’s kidnapping or the attack on the Kent farm there’s nothing Superman can do. Meanwhile Lex has a computer analyzing all the information and comes to one conclusion: Clark Kent is Superman. This idea Lex rejects immediately, refusing to believe that someone with Superman’s power wouldn’t use it like he would and play at being a “mere human”.

I’m going to forgo the usual review format on this one. It’s not a Superman story, it’s a Lex Luthor story. This is an odd choice for the second issue when you’re trying establish a new continuity for your hero. Remember issue #1 was the Metallo attack. So what you have is a story about how evil Lex is, in his torture of Lana to get info on Superman and his treatment of one particular computer expert in forcing her to date him and immediately firing her when her computer program comes up with an answer he can’t possibly accept. (More on that in a moment.) This version of Lex Luthor is clearly more evil than the pre-Crisis mad scientist out to prove his genius to the world. Byrne is projecting everything he thinks businessmen are into Lex and while it’s become the “accepted” take I just don’t find him nearly as interesting as the original I grew up with. Evil businessmen were already old hat by then and this feels like a whole new character, which would have been preferable to rewriting Lex in my personal opinion. I basically hate this Lex, though not as bad as say Cliff Carmichael over in the Firestorm comics.

That said it is a good examination of this take on Lex, the levels of evil he’ll go through in the treatment of the computer expert who happens to be attractive, his torture of Lana and heartless (no pun intended) murder of Metallo. He never thinks twice, and acts on his instinct to serve his cause, namely himself. He believe his own internal hype and his warped perspective on power versus Superman seeing power only as a means to an end rather than the goal itself like Lex.

On it’s own this is a really good story. Critically I have no major complaints outside of Lex’s redesign being too close to Kingpin on a less strict exercise routine (or diet if you want to make Spidey-quips). Personally I really don’t like this interpretation of Lex but it tells the story it wants to tell quite well.