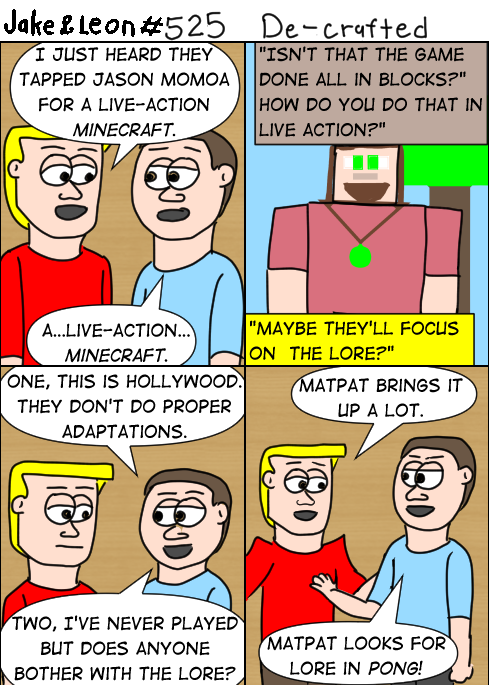 I tried looking for videos of people playing through the story. All I found were builders and a weird game of hide-and-seek.

Considering a new hairstyle for Leon after a slightly off drawn line looked good to me. Let me know what you think or if you even notice.

A live-action version of Minecraft should be all the proof you need about something I’ve been bringing up in articles the past few years. Hollywood hates animation. Whether it’s cartoons, comics, or video games Hollywood thinks nothing is good unless it’s in live-action. However, whatever lore Minecraft may or may not have it’s the blocky art style that makes it Minecraft. It serves the look of various places, adds to the challenge of building things compared to a more “normal” design system in an online game like Second Life or a 3D graphic program like Blender, and even affects game play from what I can tell. Lose all that and is it even still Minecraft? Especially given how little Hollywood cares about accurate adaptation and just wants to use something popular as a cheap marketing gimmick. I hope the games fans are prepared to not recognize this movie. The rest of us learned that lesson the hard way, especially when it comes to bad video game adaptations.

Meanwhile, over at The Clutter Reports I finished up something I started two weeks ago by cleaning the rest of the bathroom. As usual lately my week of wasn’t all that restful. As I mention in the article I had more of those weird dreams that messed with my head all day, more atmospheric creepy than anything else but it was enough. I got over that only to have two separated days of insomnia. In one way it’s probably good I dropped out of last week, but I didn’t get done what I wanted to outside of banking a bunch of Finally Watched reviews for the future.

I was also saddened to hear about the passing of famed comic creator Neal Adams. I don’t really do the death announcements anymore for various reasons, all admittedly personal more than what passes for professional on this site, but he’s one of the greats of comic book art and I felt like acknowledging it.

This week we’ll see one of those as well as the next chapter of Robotech: Before The Invid Storm. I also finally re-linked Linkara’s first History Of Power Rangers episode as he tries to get past Toei’s copyright bots if you’re curious to check that out. Otherwise I wish I knew but who knows what other plans are going to get scuttled. I did manage to add a few old videos to BitChute and I’m hoping to caption at least one of the uncaptioned YouTube videos this week, but I seem to be in “we’ll see what happens” mode right now and it’s getting on my nerves. We’ll see how back to normal (see what I mean) and I hope you all had a good last week and have a good this week. God bless.