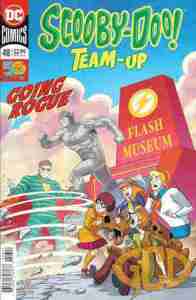 Talk about going out for a spin.

The gang arrives at Central City not at the call of the Flash but his Rogues. The Top has been stealing what they stole, only he’s supposed to be dead. They force the gang to help track them down the ghostly former Rogue and comes up with a plan to draw him out by robbing the Flash museum. The gang manages to expose Abra Kadabra as the fake Top but to stop all the villains they get help from the original Flash and Kid Flash.

What they got right: Flash’s rogues gallery is a bit unique from other heroes’ villains in that most of them are friends, and it’s neat to see that in action. The Top was also romantically involved with Golden Glider and she still cares about him. But they’re still criminals and you still want to see them lose. It’s a rare example of villains that are humanized but still villains and I appreciate how that’s come about. Sending Barry away allows the Rogues to take part and Shaggy shows a bit of cleverness in getting a message for help out that’s still uniquely Shaggy.

What they got wrong: I’m going to bring up every time Fisch does, especially when there’s nothing else to complain about. The gang have dealt with thieves, smugglers, people seeking revenge, and other crimes besides crooked real estate developers. Can we stop acting like that’s the only villain they deal with when they aren’t teaming with superheroes? Does ANYONE at DC Comics know how to write a proper Scooby-Doo story?

What I think overall: This is a fun story, though it could have been all Rouges for what little contribution the gang actually makes to the story.