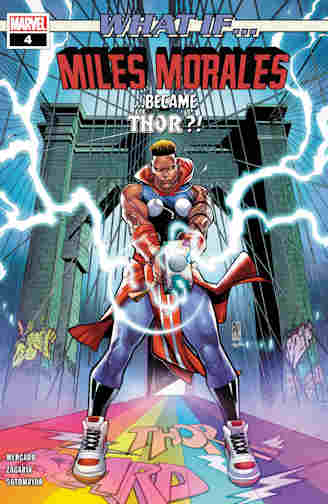 There are times running this site where I have to ask myself if I should do something just because I can. I might just be a voice in the crowd but when I try to write a commentary I want to add something different, a perspective that’s pretty much me. Sometime it means I’m being less biased and sometimes more biased. I don’t want to be doing the same thing everybody else is because otherwise coming to BW Media Spotlight is a waste of your time.

You’ve probably heard what’s up with this one. This is one of those times where it appears a surface viewing is enough to declare the book “racist” based on basically doing to Marvel’s Asgard what The Wiz did to the land of Oz. And yet this is one where left and right, SJW and Comicsgate, are actually in agreement across sociopolitical divisions. It’s like the comic equivalent of NAFTA. Now you know I try to limit my political discussions, which gets harder as social and political perspectives continue to work their way into narratives at the cost of the story. However, this one is getting everyone’s panties bunched. Then again, when has the guy who deep dived Seduction Of The Innocent taken the internet at face value? So let’s go over what’s already going on, and then I have to ask…do I do with this comic what I did Fredric Wertham’s anti-comic tirade?

As of this writing I have not read issue #4 of What If: Miles Morales. It’s a comic trying to bank on the success on Sony’s only celebrated Spider-Man movie since Sam Rami’s second film. Spider-Man: Into The Spider-Verse, which I haven’t reviewed thanks to a glitch in the previous recording and no time to watch the new recording, pushed Miles into the spotlight outside of comics, because cartoons are low on the pecking order. His first step outside of the pages was in the Ultimate Spider-Man cartoon and now he’s one of the trio in Disney Junior’s Spidey And His Amazing Friends, where to be less confusing for kids he takes on the nickname Spin. The series has also been taken as pushback against those who look on Miles as a tokenized replacement for Peter Parker, which he was in the Ultimate comics universe.

Here’s my opinion on Miles. When he was Peter’s replacement in the Ultimate universe (and I still believe this happened after Donald Glover voiced a desire to play Spider-Man…not voice Peter but just be black Peter Parker) that was fine. Miles was half black and half Hispanic–which nobody seems to mention because apparently “representation” doesn’t extend to mixed race kids, especially if a parent was white. We ignored that in a President after all. It’s when he was moved to the Ultimate universe after it was destroyed (a mercy killing if you ask me) that problems started. They wanted to continue calling him Spider-Man, taking some of the uniqueness out of the name because they couldn’t come up with anything else. It took the cartoons to give him an alternate name, which come to think of it was the case for “Spider-Gwen” and the character “Ghost Spider” in Marvel Rising. Now she too is in the Disney Jr show as her own character, ignoring Peter’s history with Gwen Stacey entirely. At least in the comics she’s in another universe.

To pour over the history of this What If spin-off series however I’m going to tag in Comics By Perch as he goes over the problem with the whole series, not just this particular issue in question. Spoilers for the issue.

What I want to focus on is that Yehudi Mercado is the writer, but nobody at any point called him out for this. Not the art team, not the letterer, and not the editorial staff or publisher. Yet it’s the writer alone getting all of the blame and he did try to apologize…with all the compassion of a form letter and the obligatory “I’m donating what I would have made to a charity connected to my error” declaration. Another comic commentator I follow is Eric “YoungRippa59” July, who is a bit more hardcore in giving his opinions than Perch. His response to the apology, and this is a black man who already calls Miles Morales “Peter Darker” and complains about how the race swap movement only sees legitimacy in white characters and that’s why they’re not pushing new characters or people of color who have been buried in the Marvel universe, is decidedly apathetic. Actually, given the swearing in this video “apathetic” may be an understatement.

And here’s where I come in. I haven’t followed this side series like Perch. I don’t hate the character like July, though I do agree with a few of his points having followed the character’s creation during the years of this site in operation. So I’m considering doing a deep dive into this book to see if it’s as racist as everyone says or just another take on the Wizard Of Oz. Granted you’d think Asgard should be making Wakanda look like a ghetto rather than being a ghetto, and when you have the narrator rapping and lines like “By Odin’s Fade”, which apparently is an actual line of dialog in this comic that they’ve been making fun of in comments on videos and articles I’ve seen on the comic (the main commenters are often distracted by Mjolnir being tagged and the sneakers on the power line), you aren’t helping your case. Still with something this controversial there’s a part of me that wants to go full into the story to see if there’s anything good about it or if it is indeed the unintentionally racist trash both left and right leaning comic fans say it is. Thus I put it to you, the BW readership who rarely responds to polls I post…to respond to this poll I posted.

Apparently we have less visual appeal now. Thanks, WordPress block editing requirements even though I use the classic editor because the blocks are such a pain. Anyway you have until midnight ET on Thursday going into Friday to decide whether or not to put me through this. We’ll see how racist this actually is and what could have been done better. That or we’ll just make fun of it, or possibly somewhere in-between.