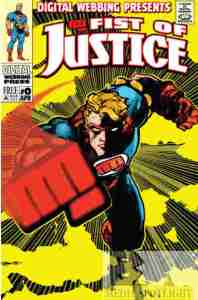 Knuckle sandwich joke or…something. This has not been a good week for cover caption gags.

“For Justice And Freedom”

I made a decision recently to not do previews anymore, just full-fledged stories (outside of some review copy someone sends my way, which has only happened once or twice in all the years I’ve done this site). This story is kind of why but with comiXology harder to use now that Amazon has reduced it to a Kindle category and the comics beta is actually less effective than the regular Kindle Cloud (is it that hard to just use the regular comiXology app and the guided view feature?) I didn’t feel like powering up the tablet to use the regular app, the only good way to read these comics now. So here we go, and from what I can tell the comic was a few issues in so this might have been a Free Comic Book Day promo for all I can tell despite the lack of FCBD branding. Amazon doesn’t have it listed as available so I only have it because I got it on comiXology before it collapsed.

Marc Mason is a reporter but also the hero of Charm City, the Fist Of Justice, who is attacked by his arch nemesis. Or maybe he’s just a loon in an insane asylum they humor until he gets violent. Really, that’s all there is to summarize in eight pages.

I’m not sure if there’s some big mystery here or if this is some superhero version of Sucker Punch if Zack Snyder learned what primary colors are. All I can say for certain is there’s really nothing here to get me interested in the story. Maybe the mystery is about how the city’s hero became an old man in the looney bin, maybe it’s all in his head. Either way it’s not a story I’m drawn to. Speaking of drawing though I will say the art is quite good. In the end though this really doesn’t get me interested in checking out the series. That’s not a slight against the comic, just a reflection of my interests. On the technical side it looks okay, but if a preview is supposed to make you interested in the full series this one just didn’t do it for me.

Posted by ShadowWing Tronix on September 3, 2022 in Yesterday's Comics and tagged Digital Webbing, Fist Of Justice.