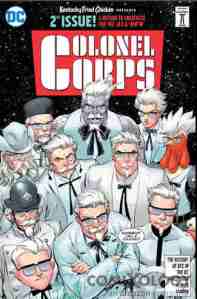 Maybe it’s my overactive imagination, but “Chicken Colonel Sanders” has me the most worried.

Colonel Sunder, who apparently appeared in the first DC Universe/Kentucky Fried Chicken crossover (yes, there’s more than one), is unhappy with the Colonel’s “hard way” of doing things while Sanders tries to undo his “easy way” from the first story. (I got that through dialog because I haven’t read the other one.) The Earth-3 Colonel gains the services of Gorilla Grodd to steal the information from versions of Sanders from across time and space, but the Earth-11 Arla Sanders joins with her reality’s Flash to visit the regular universe’s Harland Sanders to recruit other Colonels, each of whom only remember one of the 11 herbs and spices of their secret recipe. Together they travel to Earth-3, defeat the villains, and reclaim their recipe.

Look, there’s no point giving this a normal review. It’s silly fun to promote Kentucky Fried Chicken at Comic-Con, and it wasn’t the weirdest promotion they did. (There is literally a Lifetime Channel short film, where Mario Lopez plays a version of Sanders in a romance story. Look up A Recipe For Seduction some time.) What we do get in this silly idea, and remember I’m actually pro Kool-Aid-Man’s comic superhero adventures, is a tribute to various DC universes and timelines. You have the anthropomorphic version, the Bizarro version, the Teen Titans cartoon version, the Kingdom Come version, the Legion Of Super-Heroes version, and so on. The story isn’t bad, the art is not only pretty good for what this is but changes styles to match each reality (though the universe-hopping Colonels retain their native world’s art style). The idea that the Colonels are all friends with versions of the Flash is only a plot point for finding the Colonels in different realities since we only see the Earth-11 lady Flash, but that’s the closest thing to a nitpick.

Look, if you somehow expected more from this concept, that’s kind of on you. It’s a silly cross promotion between DC Comics and a chicken restaurant. If anything it’s more fun that it needs to be, which given the Free Comic Inside article series you should already know happens more often that most people think. It won’t become your favorite comic ever most likely but it’s still a fun read if you come across it.