Last night ABC debuted Agents Of SHIELD, a TV series set in the Marvel Movieverse and featuring the not-so-dead Agent Colson. So how was it?

From what I can tell, Agents follows a post-Avengers world (at least taking place after that movie, but if it also involved Iron Man 3, the weird work hours I was getting at the time kept me from seeing it) in which new supers appear to be showing up, and it’s up to Colson’s “not a team” to find and protect them. How you protect people with superpowers I don’t follow but they’re also hoping to protect other people from not-so-nice supers or those who exploit supers. For example this episode involves the guy from the ads, the hoodie-clad super-strong guy. But things get…out of hand. I won’t spoil it for you…at least until the spoiler paragraph.

“Of course I’m not dead. We actually like comics at this production company.”

I didn’t really get a handle on Fitz and Simmons, the techies of the group. They kind of remind me of the twins from Bioshock Infinite in their mannerisms, only a bit more on the manic side. That’s all I’ve got. By the way, is that the same actress playing Maria Hill? i haven’t seen The Avengers since that first time in theaters.

Grant Ward (Brett Dalton) is our gateway into the series, and I like him. I was worried he was going to be a jerk, full of himself and only able to back up most of it until he’s brought into this group. Thankfully, my fears weren’t justified. He isn’t hard on procedure or the rules, which was another way they could go, but he is new to all of this (the whole world is, but this isn’t his normal kind of assignment) and while he’s compared to the Black Widow he doesn’t end up a Gary Stu or the butt of the joke (except at one point but it worked) so I’m planning to like him.

Melinda May (Ming-Na Wen, who a few of the people I follow on Twitter were already drooling over) is…I’m not really sure. Did she quit SHIELD or just move to an office job? Anyway, Colson recruits her to fly their mobile HQ plane, although you can bet his assurances that she’s just the bus driver is going to hit the wall…like she did this episode.

Rounding out the cast is Skye (Chloe Bennet, a computer hacker who plans to go all Wikileaks on SHIELD but it looks like she’s going to sign up. I like her, and as the only one who hasn’t undergone SHIELD training she may prove interesting as far as her perspective. 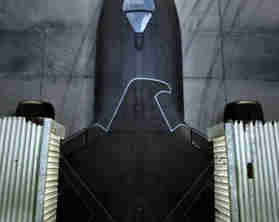 Who are they detailing the plane for? The International Space Station?

And here’s the spoiler paragraph! The episode had one snag for me on a personal level…the hoodie-bearer is getting his powers from Extremis. Long time Spotlight readers know I really hated when this was added to Iron Man and it seems to want to keep popping up, including the last season of Iron Man: Armored Adventures. That said, it was used fairly well as a plot device and while I hope to never see it again, there is a connection to a mystery that I’m betting will at least be a factor in this season. I’m hoping for AIM myself, although a more relaxed version. I don’t think a TV budget will properly portray MODOK. Still, he’s just a man trying to support himself and his son and he’s not really a villain. It was a good story and I hope to see more like it.

Overall Marvel’s Agents of SHIELD has my attention and made me miss the returned Whose Line Is It Anyway so that should say something about this show. If you liked The Avengers or the rest of the Marvel Movieverse, I think you’ll like this show. Don’t let me down, folks. Joss Wedon is continuing to make more fun stories than DC has, and I’m betting the announced Gotham City series had nothing to do with this coming out. Also, I’m betting I’ll like this more because it’s a fun superhero (or at least superhero universe) series.

Remember when that was DC’s department?