You know what I wanted to have here today? A Captain PSA strip. I even think it was one of my better strips. I liked the idea, and the art looks better than previous installments. I’m quite proud of it, even if there are easily better comics out there. It’s an improvement for me and I’m fine with that.

Then the Man Of Steel creative team had to open their mouths again! 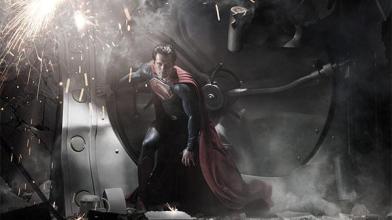 This time it’s writer David S. Goyer, one of the people who screwed up the Superman mythos in Smallville and worked on Nolan’s Batman films. This already made him an ill fit for Superman but he continues to campaign for their version of Kal-El like Obama pushing his health care plan. I’m not buying either campaign but this isn’t a political blog so Goyer’s asking for my full blogging wrath. This is from a BATFA and BFI Screenwriters’ Lecture as reported by Digital Spy where he continues to act like his Superman is the best. What he still fails to gather is…this isn’t Superman!

Traditionally in previous Superman comics and movies, the character has been reluctant to take a life. Goyer, however, stated that the Man of Steel’s moral code “exists outside of the narrative and I just don’t believe in rules like that”.

“Exists outside of the narrative”? What, like Batman’s hatred of guns? I’m not following you here, Goyer.

“We were pretty sure that was going to be controversial,” Goyer said. “It’s not like we were deluding ourselves, and we weren’t just doing it to be cool. We felt, in the case of Zod, we wanted to put the character in an impossible situation and make an impossible choice.

On your first story of the new continuity? That seems out-of-place, but I’m glad they weren’t “doing it just to be cool” or whatever. Actually, that’s still pretty sad. Still, that is my problem with this. They didn’t write themselves into a situation where the hero has to kill on accident, that the story went in that direction. That I would understand. They deliberately created a situation where Kal-El has to kill somebody…and didn’t follow up on it, saving that for future movies. Unless your running a continuous story, and Michael Bay’s Transformers never convinced me that was happening so I doubt this series will, why end a movie that way? Other stories in which Superman has been forced to kill or nearly kill someone only worked if those stories involved Superman reacting to what he did and how it made him a better superhero to know that he wasn’t becoming the criminals he fights. His only fear in this movie was being shoved in a lab or running for his life.

“This is one area, and I’ve written comic books as well and this is where I disagree with some of my fellow comic book writers – ‘Superman doesn’t kill’. It’s a rule that exists outside of the narrative and I just don’t believe in rules like that. I believe when you’re writing film or television, you can’t rely on a crutch or rule that exists outside of the narrative of the film

Crutch? There’s the line that started this article. This isn’t a “crutch”, it’s his character for about 75 YEARS! It’s like if Captain Kirk became Captain Jack! (Sparrow or Harkness, take your pick.) This is established multiversal continuity that Superman is a compassionate, upright person who always looks for a solution other than killing. That’s what makes him and other superheroes so interesting. It would be like the Punisher or Charles Bronson’s character in the Death Wish series not kill anybody. It’s against established type.

Then again, having a hero that doesn’t kill seems to be against a lot of Hollywood’s perspective about heroes in movies. Not that they won’t kill at all, but there doesn’t seem to be a reluctance to kill, either. That’s fine in an over-the-top action movie but everything is so close to “real life” that suspension of disbelief is near impossible for the body counts and amount of gore you see in these things. They can’t conceive of a superhero that doesn’t kill….waitwaitwait….

Recently I finally watched The Dark Knight (speaking of movies that don’t put the name of the superhero in the title) although I still haven’t seen the final movie. You know what else I didn’t see? Batman killing anyone. In fact not only does Batman NOT kill the Joker and finds another way to stop him, but he stops two guys in a Batman and Scarecrow costume from shooting up a bunch of drug dealers! (No pun intended.) Then there’s Harvey killing people showing that the Joker corrupted him, which is the goal of Nolan’s Joker. One of the points made in this movie was that BATMAN NEVER KILLS! And now you want to tell me that Superman, a man who didn’t watch his parents shot to death before his eyes, who wasn’t trained in part by the League Of Assassins, who doesn’t dress up specifically to scare the living crap out of his enemies, shouldn’t have a “no kill” policy? Really?

“So the situation was, Zod says ‘I’m not going to stop until you kill me or I kill you.’ The reality is no prison on the planet could hold him and in our film Superman can’t fly to the moon, and we didn’t want to come up with that crutch.

Again, what is this “crutch” he keeps talking about? Crutches (or whatever he’s calling a crutch) do not hold a story back. They are a challenge to be dealt with. This guy would hate working on something like Superfriends. A crutch shouldn’t hold a character back. If I wanted to write a Punisher-type hero who doesn’t kill but still wants to take down the mob, that isn’t a crutch. That’s a chance to say “how can the hero beat the bad guys if he thinks using their methods is wrong”? That’s a challenge! It’s why I’m not writing off the RoboCop remake simply because it isn’t rated “R” like the original!

And again, you didn’t seem to have a problem giving Batman that “crutch”, did you?

“Also our movie was in a way Superman Begins, (he admitted it!-SWT) he’s not really Superman until the end of the film. We wanted him to have had that experience of having taken a life and carry that through onto the next films. Because he’s Superman and because people idolise him he will have to hold himself to a higher standard.”

As fellow Friday Night Fighter Notintheface pointed out on Twitter, his parental upbringing, his “ghost dad” and even the church he went to (which, if it was a good church, should already have preached against murder or killing someone when it isn’t a case of self-defense or defending someone else) should have already posted that message in his head. He should know not to kill. And there were ways to stop Zod without snapping his neck! He once got on Wonder Woman’s case for snapping Max Lord’s neck…and Lord was mind-controlling him to hurt people! That’s who Superman is! That’s what he does! HE’S SUPERMAN!

He also said that Goyer hasn’t “earned” this story, citing the examples I just did, including one where Superman kills an alternate universe version of Zod and his minions to protect his universe, a move that so affected him that he went off on his own for awhile. Not having read that story I don’t know how insulting it would be to compare it to “Grounded”. Goyer, Nolan, and Snyder may not have done this story to be “cool” but they obviously did it to push his version of Superman…and that’s the problem not only with the movie but with these interviews.

Goyer, if you’re not willing to hold Superman to the same standards you are Batman, then you shouldn’t be writing a story that claims be Superman…which you didn’t because Superman’s name only comes up once and not from Lois but some random solider off-screen that gets relayed to the CO. Please…just stop trying to convince us your Superman is the better version, because he isn’t. “Steelman” is an interesting hero, but he is NOT Superman and the more I think about it, and the more you make me think about it, the harder I find it to defend this movie even as much as I did in the V-Log.

Please, enjoy your supporters, the people who actually liked Man Of Steel. There are people whose opinions I respect that are on your side. But for the love of Rao, please stop trying to convince the rest of us to fall in step with your vision. We liked the Superman we had and your hero is no Superman!