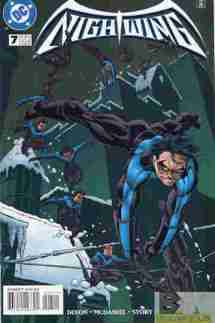 He couldn’t do that in the Batman costume. At least not as well.

Tired of dealing with Soames and the case going nowhere (plus in his mind putting Robin in danger), Nightwing goes full-on trying to beat information out of the bad guys and looking to Oracle and Wally West for information. This all soon leads him to the new force in Bludhaven…Blockbuster!

What they got right: They could only hold the mystery back for so long. Even now I don’t know a lot about Blockbuster,  but (questionable art aside) he looks like someone who could twist some necks. It’s also interesting to see this kind of guy being the boss rather than the hired muscle. The revelation was well handled.

What they got wrong: That art problem I mentioned. Nightwing comes off kind of mean-looking to a level out of character for Dick. Wally just got out of the shower, but the water on him looks more like blue tattoos, a mistake I would make. Blockbuster doesn’t look human, even for a guy a quick bit of research says was overusing steroids. This thing scream 90’s artwork bad.

Recommendation: If you’ve been following the story all along then this is a must-have issue. The art is bad but not unwatchable and as long as I can tell what’s going on I’m happy with it.