Transformers was and is the kind of toyline that stands on its source gimmick, that being a robot turns into vehicles, weapons, animals, and even other machines. While there used to be tech specs with the characters personalities, you only had stories if you watched the TV show or went to the comic store. (Actually, my Transformers comics came out when I could still get them at a grocery store and the first few came out at the pharmacy near my school, which is gone. I also had a subscription at one point so they came right to my house.) Marvel never made any mini-comics and Hasbro doesn’t have an in-house comic studio ready to go like Mattel had with Masters Of The Universe and the DC deal.

However, Dreamwave, whose artists also did the artwork for the Armada and I think early Energon boxes (it’s been a while) also made a series of minicomics packed in with the toys of those lines. You know, before Pat Lee sunk the company like the Titanic. I thought I reviewed one of these already for Free Comic Inside but it doesn’t look like I have. So let’s take a look at the first one to see how they started out. I’ll give you a hint: you may want some extra Energon for this one. 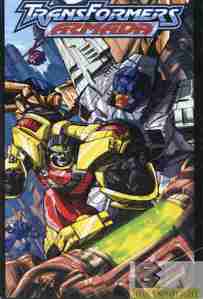 Some of these credits are a first for mini-comics.

I’ll give this comic credit for one thing. You have to wait until page two for it to go wrong.

The role of Hot Shot will be played by Wolverine.

You may have to click on that to go full size but when you have Optimus Prime going “Hot Shot, you must save the day”, you wonder if the writer is that incompetent, that in need of an editor (as you read this you’ll wonder if the Editor-In-Chief did anything since there’s no other editor listed), or that insulting to kids. Then again, you will also wonder if the need to print the dialog in all three languages they planned to need (this extended from the backs of the toy packaging to save money) used up so much space that he did the best he could. I’m going to imagine all are to blame, because I wasn’t thrilled with what the writer did in the comic Dreamwave was putting on the store shelves, but we’ll get to that eventually.

The story has Optimus somehow learning from his Oracle lair that Megatron has an energy-draining device (Sarracini must have forgotten the story of Armada was that the Autobots and Decepticons were fighting over Mini-Cons, robots who could enhance a Transformer’s power…somehow, and not Energon. That would be the next toyline.) He sends Hot Shotverine up there to stop it. He also sends Jolt, the partner Mini-Con of Hot Shot for the actual toy, but Hot Shot’s convinced he doesn’t need the little robot’s help. And yes people who watch the show, the Mini-Cons speak in this story instead of making old connecting to the internet via dial-up noises. This was true of the main comics as well and we’re all better off trying to read it this way.

Hot Shot arrives at Megatron’s draining station and is unable to remove the machine. He’s also too dumb to realize there would be guards, namely Cylconus (a helicopter in this line) and his partner, Crumplezone. Crumplezone was specially designed to merge with Cyclonus, forming a second cockpit and extra firepower. This was probably the most interactive of the Decepticons in this line. (Jetfire’s partner Mini-Con became his landing gear if I remember correctly, so Cyclonus may win the award for over all compatibility.) This leads to the most unintentionally goofy bit of dialog thanks to the multiple languages. 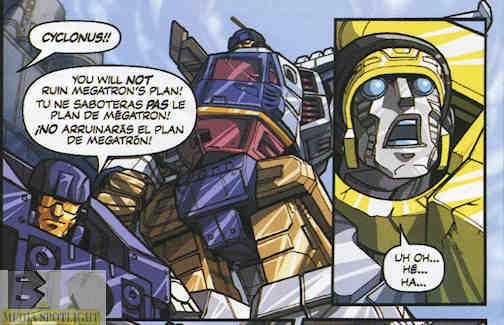 Maybe he was trying to say Hee Haw. I liked the show as a kid.

Hot Shot is in trouble after Decepticon and Mini-Con combine until Jolt flies in and drops something that allows Hot Shot to activate his front fender claws. I know this isn’t The Clutter Reports but I always wondered why Hot Shot had a weapon gimmick that involved something external that wasn’t a Mini-Con to activate it. Not featured in the comic is Hot Shot’s rear vehicle axle becoming an overhead rocket launcher in robot mode when combined with a Mini-Con but what was the point of this thing? Jolt also combines with Hot Shot, using his helicopter blade to give him extra push and he’s able to escape Cyclonus even while carrying the energy-draining device. After their getaway (not to be confused with Getaway because he wasn’t in this line) they agree to be partners. Happy ending!

Wow was this a lame story. I complained that there wasn’t a lot to Superman’s Super Powers Collection mini-comic but this makes that look like a DC Masters Of The Universe mini-comic in comparison. While I guess some blame comes from the need to have three languages in one bubble or caption box, you still get dialog like “you must save the day”. The story is kind of short, with the rest of the pages devoted to a “flip book” catalog of the first wave of Armada figures. There are also way too many closeups, although if you’ve seen the Dreamwave in-house art style you might consider that a positive thing.

One positive I will agree to is how the Mini-Cons are presented. They don’t just connect and make you stronger like on the show, the combinations are functional. Crumplezone combines with Cyclonus differently than other Mini-Cons and offers a new weapon. (There was also sold separately team that could link to a special spot underneath Cyclonus’s cockpit, activating a feature on the Mini-Cons that made weapons spin or shoot. In other words Cyclonus activated THEIR gimmick instead of the other way around.) Jolt combined to the back and offered a speed boost with his blades. This is how the Mini-Cons should have been marketed. Something about their alt mode, or through minor transformation, giving the Transformer it “powerlinked” to new weapons, armor, or tools. That would have made the Mini-Con much better looking, so points to Sarracini for getting that right.

This was really a weak start to the mini-comics. It’s not horrible but it’s not very good. If you’re a mini-comic collector like I am, I’d only track this one down to have the complete set. Otherwise, I don’t think it’s worth it. Dreamwave produced a few more for Armada and some for Energon (I think the rest came from Japan and was simply translated) and we’ll see them in future installments of Free Comic Inside. Hopefully they get better.

And before someone mentions it, yes, I of course know there’s a fan-rewrite of this full of nonsense about Hot Shot trying to get jam. I just don’t know who’s hosting it to link to it.