Since we’re an issue short of a full week with the Cylon Apocalypse it’s time to finish reviewing one other franchise. I looked at the first movie’s adaptation, and Marvel’s attempt to create a comic series around the movie (that was nothing like the movie) but I didn’t get to the second movie’s adaptation. And I don’t mean the one with Frank Miller’s intended script. 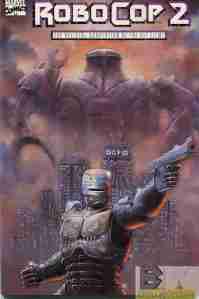 This collects the three-issue adaptation. According to the Grand Comics Database, the cover for this collection was done by John Romita, Jr.

The police are on strike (again in Marvel’s continuity, still in the original movie). A new drug called Nuke is flooding the streets. OCP is happy with the current collapse of Detroit, as they hope to buy it up as part of their Delta City project. Cain, the man behind Nuke, is hoping to take control first, and even RoboCop is helpless to stop both Cain and the psychologist hoping to reach the high ranks of OCP. Eventually, RoboCop is able to take out Cain, but the psychologist, Doctor Faxx, uses him to create a new RoboCop…which turns out to be a bad idea. Murphy must take the monster down one final time and discover his own identity instead of living in Murphy’s shadow while still being more than a mere machine.

I’m not going to review the movie here. Maybe someday I’ll do a Video Review but it’s not currently on my list. I will say that you can tell where Green changed Miller’s style, but it does make for a nice skewering of both liberal and conservative extremes.

What they got right: The ads and news reports that are part of the social commentary are in, something the first adaptation forgot, and they don’t distract from the story. The designs for the two versions of the second RoboCop are good. I also like how they keep all the aspect of the story, including Murphy’s moment with his wife, in the story.

What they got wrong: A little violent for my usual taste, but that’s true for the movies, and I still enjoy those. And those don’t have to deal with the Comics Code.

Recommendation: The movie is your best bet but as comic adaptations go it’s pretty good. If you see it I wouldn’t turn you away from it.