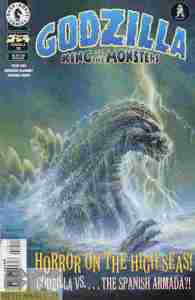 Only Godzilla would go swimming during a lightning storm.

Marina and Burton arrive in England, 1588, but Godzilla’s out to sea. Mason used Godzilla to attack the Spanish armada coming to attack England, hoping to grab the “artifacts”, like armor and weapons, to sell to collectors in the present. Sir Francis Drake convinces everyone to neglect to mention something that would get them a trip to the nuthouse. Kazushi sends Kino and Také to assist them but they end up in 5024 instead (and of course we bombed ourselves out of existence because science fiction). Burton and Marina are able to snag Dixon and after a brief power failure, Kazushi and Reiko are able to get the boys time-traveling again, only they’re at Mason’s next target–or rather above it! It’s San Francisco, 1806, and Godzilla is underneath it!

What they got right: I suppose this could serve as an interesting history lesson, considering all of the places they’re visiting. Burton and Marina are an interesting grouping.

What they got wrong: I’m still not sold on Godzilla being the cause of every mysterious event in this story. Godzilla is the real destroyer of the Spanish Armada. Godzilla caused the 1806 California earthquake. I hate when science fiction does this…and I hate the trend of “the future is the apocalypse” that was becoming the norm around this time rather than balancing good and bad futures. I don’t think there’s a happy future left in comics or sci-fi anymore. And Burton is the worst person to send to a pre-World War II time period.

Recommendation: Holding on to this just shows my love of Godzilla because I’m really not getting into this story. It’s a premise I’m just not a fan of outside of the Big G.