The Death Of Clark Kent

I haven’t had a chance to really look deep into DC’s new “DC You” rebranding (but at least this time it’s not another reboot), I have to admit I’ve seen a few things that look interesting. Starfire appears to be getting a much needed recreation after Lobdell’s re-imagined insult. Batgirl is a nice approach. Gotham Academy, what little I’ve heard of it, sounds interesting. But then you have the solicit for Bat-Mite’s comic that makes me think Bat-Mite is going to be an attempt to insult the critics, like a more fun Superboy-Prime. Wonder Woman is now Female Kratos right down to being the new God(ess) Of War, in violation of everything Wonder Woman has been since her very first appearance. I don’t care about Commissioner Gordon being a new armored Batman. A movie with Batman is coming and they’d be stupid to keep that up, dumb as the idea is to begin with. The rest are not my thing but I give DC credit for embracing diversity.

But seriously, of all the comics you brought back…PREZ? Is that DC canon now? Is DC just losing all traces of its identity? It’s already tossing out as much of the previous one as it can, and I can think of no better example than what they’re doing to Superman. Or rather to Clark Kent.

I was hoping that Divergence was some Elseworlds type event, or something like Flashpoint, but it appears this is your new normal. The last bit of proof that there are people running DC that, whatever they tried to prove with Convergence, don’t care about the classic DC characters, or care but don’t want to work on them, creating their own universe and just using the characters names. Now they’ve broken the last straw, the unforgivable. They’re killing off Superman’s secret identity and it’s a symptom of a larger problem in modern superhero comics…the abandoning of the supporting cast and alter egos.

This is something I’ve brought up before. The concept of the supporting cast and personal life for superheroes are being tossed aside. Heroes allegedly give that up to be better heroes in DC’s eyes. That’s a lot of bull. Something else I should point you to (and seriously watch those two videos) is a debate that was posted online about secret identities. Now for some heroes I am pro-secret identity. There are exceptions (Thor, Iron Man, Starfire, Wonder Woman) but there are pros to having a secret identity which I’m hoping to do an article on but I want to get it right. One of those who need a secret identity? Superman! 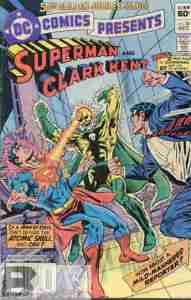 “I’m from the massage board and I’m shutting this place down!”

Let me remind you of one of my favorite Superman and Clark Kent stories. In it Superman and Clark become separate people thanks to a prototype Miracle Machine. With no Clark Kent identity Superman is now free to deal with every disaster that comes along. EVERY disaster, which leaves him no time to breathe and, as his friends note, is having a really bad effect on his personality. Of course, that could be because everything that made Superman who he is instead of what he is was now separated from him. But as Clark noted, being Superman 24/7 was taking its toll on the Man Of Steel. It was Clark and his friends that kept him sane.

I also find it interesting that during Geoff Johns’ brief run (only one story arc, right?) he went through the trouble of reconnecting Clark with his friends at the Daily Planet and now that’s been undone for keeps. In the story chronicles in the Free Comic Book Day Divergence preview we learn that Lois learns Clark’s identity and unlike every Superman story ever where that’s happened tells everybody! Was she possessed by the spirit of the reporter from Irredeemable? Because I’m betting the Plutonian killed her. Yes, this story has already happened to a Superman analog who (like most of the recent Superman analogs) went insane and decided to take over the world. Because that’s what the cynics say would happen.

And make no mistake, in their quest to play up to the cool kids, the same mindset that ended all romantic possibilities between Lois and Clark/Superman in favor of Wonder Woman/Superman, they don’t understand why Superman would want to be all mild-mannered, which as I’ve noted before is how the Superman identity works besides everything else Clark does to keep his two identities secret besides the glasses. Yet, the cool kids make fun of the glasses. Even Superman And Bugs Bunny took a shot at the glasses when Foghorn Leghorn chided Superman over them. Heck, they did a whole comic blaming it on super-hypnotism back in the…yes, another article. See, I’ve brought this up so much because it matters to me. And it comes down to DC staffers going on about how they want to make the heroes relatable versus a desire to make them gods. As I’ve said, they are NOT gods. They are people with extraordinary talents or superhuman powers.

And that’s the thing about Superman. He has “powers and abilities far beyond those of mortal men” but he is not a god and it is wrong to write him that way. He is a human being where it counts! He was raised on Earth by caring Earth people who taught him to have good morals and to only use his powers to help others. His heart is his greatest power. Clark Kent is who he is, Superman is what he does. It is through Clark’s associations with his friends that we see why he doesn’t take over the world or blow up countries or all that other stuff I keep hearing the cynical types and dudebros say THEY would do with the powers. Thank god Superman got the powers instead of these rejects from Chronicle. (I still need to see that movie. I’m betting I can go through a lot of my thoughts on superheroes reviewing that.) Too many people, from readers to current writers/editors love to focus on the “Super” part but forget that “man” is there as well. As Clark has said, he’d go nuts if he had to be Superman all of the time. 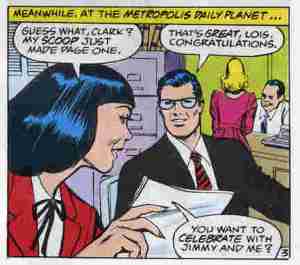 “Yep, the identity of Superman. Sorry, Clark, but they don’t give out Pulitzers in happy meals.

As I said above, Commission Batman is going to be a short arc considering Batman V. Superman: Dawn Of Justice is coming out, which means Bruce will come back with the Batsuit soon enough. I have to wonder, however, if the reason for dropping the secret identity didn’t have something to do with that movie. The way they dropped it into the end of Man Of Steel was so hard to believe that even I can’t believe it. And I’m pretty accepting of the fact that a fictional universe isn’t an exact mirror of our own, especially in the realms of action, science fiction, fantasy, and superhero stories. I have to wonder if they’re following the “glasses are a silly disguise” train of thought. To which I reply “go watch the old movie serials and Christopher Reeve’s portrayal, or look at the Ruby-Spears cartoon from the 90s, or anything with Bud Coyer voicing. It is more than a pair of glasses and by tossing it aside you are ruining the character. Not to mention Lois’s as violating her friend’s trust for the sake of the story.

Superman has been relatively the same for over 75 years. I can see doing something fresh if something is wrong with it. But in Superman’s case that isn’t true. While many kids have gravitated to Batman (because that’s who DC keeps pushing to the point of everybody having the Batman backstory of dead parents) Superman is still who people think of when they think of superheroes. He doesn’t need updating. Superman is one of those characters who was great the way he was…except to the cool kids. So the tights are replaced with armor, Lois can’t possibly handle super-woopie so Wonder Woman takes her place (people forget that as strong as Diana is the only women currently in his class are Supergirl and Power Girl since Mary Marvel is out of continuity now) and now the secret identity is being thrown away. DC should just admit they’re simply creating their own continuity with new characters bearing the old names because they want the name’s prestige but want to do nothing like the stories we love.