This hasn’t been a very good year for me, and it showed in the comic early this year. It’s hard to poke fun at fictional universes and their creators when you’ve suffered the loss of your mother. Then I had a bad reaction to new Crohn’s medicine in September and sleeping issues this month. So there aren’t as many strips to go over and even though I was on time last year I’m two dates late for the anniversary this year. Still, I do like going over my old strips. While I’m no great cartoonist, for a guy with low self-esteem I need to prove to myself that I don’t completely suck, I’m just not where I wish I was in talent levels. But that’s why I do this site.

Once again I delve into the archives and look over every Jake & Leon strip from October 26th of last year (2014) to this year (ending on last Sunday’s strip) and see which ones I’m rather proud of considering where I am in cartooning skills. Sometimes I like the commentary or the parody, sometimes it was a level up for me in terms of skill, and sometimes it was just that fun. For those of you new, Jake & Leon was born out of trying a different art style for fun and seeing a potential comic, something to start the weekly comic reviews off with. When the reviews went daily the comic hosted a wrap-up of interesting articles and when that became as time-consuming as the reviews I just did the strip and some personal updates.

So let’s take a look through a year’s worth of comics, #s 223-265, starring two guys hosting a skit show along with a family, a marketing anti-wizard, and an alien invoking two sci-fi homages. 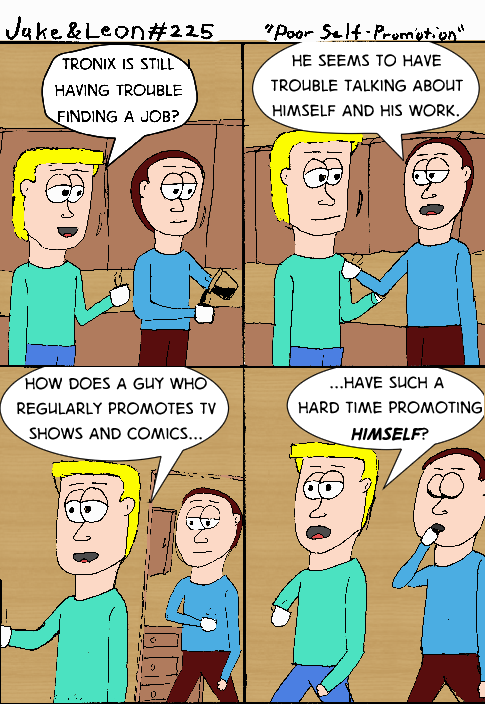 A question I keep asking myself considering my situation. I don’t even push the Patreon enough. (Link in the sidebar at the top of the page, if you want to help support my various works.) I don’t usually invoke myself in the comic but I must have been feeling down on myself at the time, not realising personally and financially things were going to get worse. 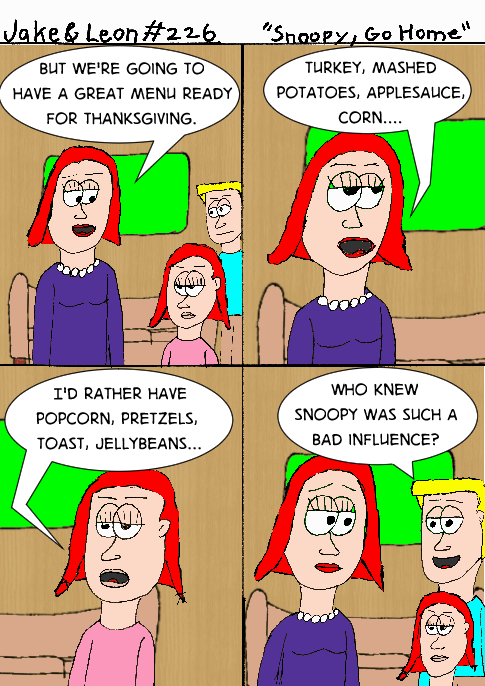 Next thing you know they’ll be climbing on their houses and shooting at planes.

This is where my decision to use either Jake or Leon in the comic if not both didn’t do as well as I would have liked. Setting this at the family home and having Bill make Jake’s joke might have worked better. My reasoning is that sometimes I see strips go weeks without using a title character for the sake of the story. But given the nature of this strip I can have at least one of them in every strip, whether the gag takes place on set or the hosts responding to the parody/commentary. 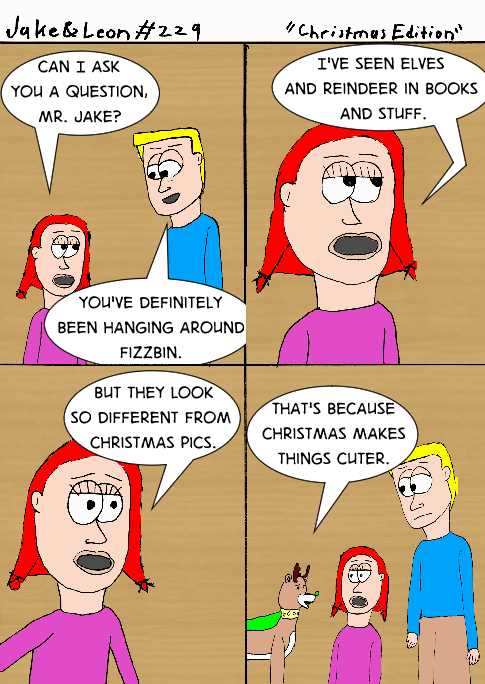 I’d say merging art styles will lose me readers, but I don’t know if anybody reads these or not.

I know the style for Captain Yuletide doesn’t jibe with this comic’s, but it was a legitimate question on Beth’s part I think. And for those of you who missed it, that’s Bryce, The Green-Nosed Reindeer. Because I can! 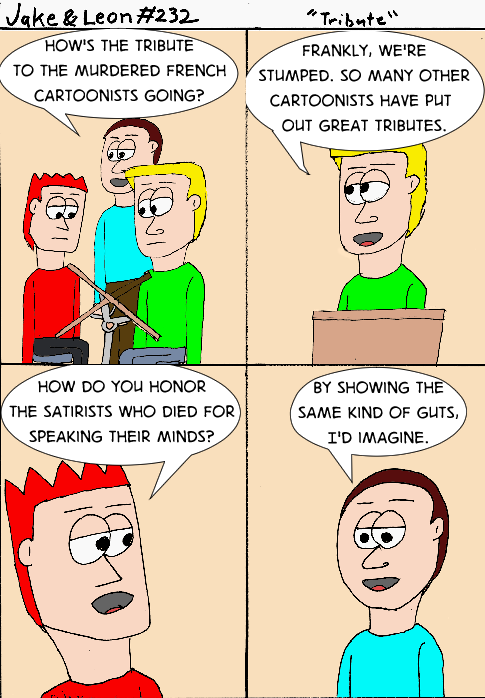 I have a comic strip with two cartoonist characters. I had to do something.

This came out after the murder of a group of French political cartoonists by Muslim extremists because they made terrorists looks like terrorists while also violating their rule about depicting the prophet Mohammed. Because that sect is one that doesn’t believe in freedom of expression or religious freedom. 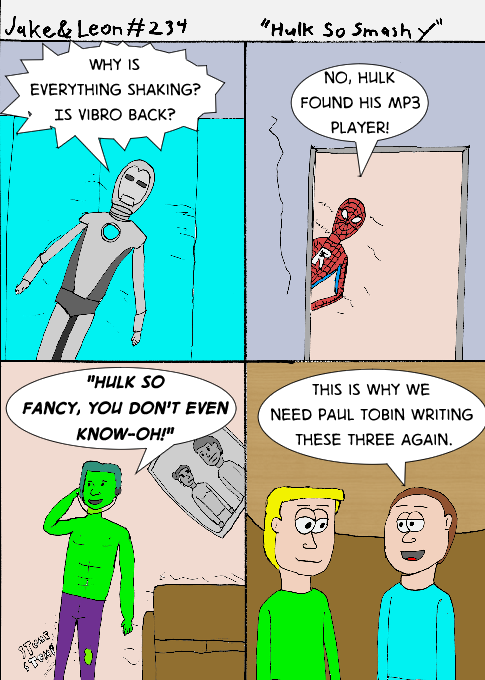 I’ve decided I hate drawing the “superior” armor as much as I hate the concept.

Lame? Perhaps, but coming up with it was proof that I was ready to stop morning (as much as one ever does, I still miss and think about my mom) and get back to pursuing my dreams. I’ll take what I can get. Besides, the next joke was worse. 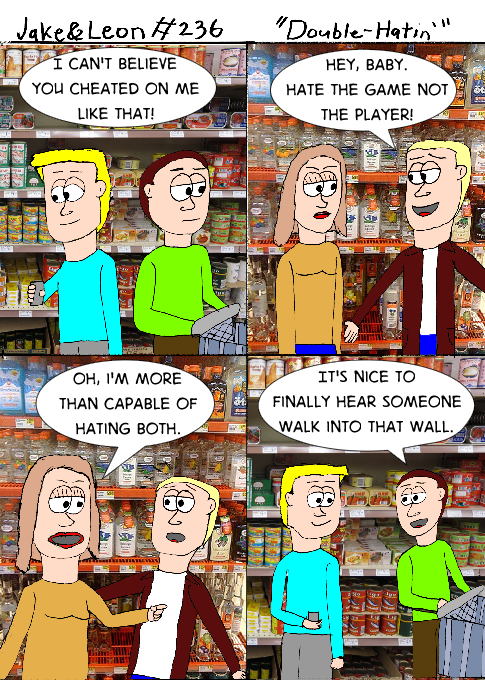 Some things you don’t discuss in the grocery store.

Ladies, feel free to use that the next time some “playa” breaks out that line. Same for us guys who lose out to these jerks that make the rest of us look bad. And yes, those are images I found online for the store shelves. I’m pretty sure time had to be against me. I try to do the backgrounds when I can, which is why I drew a full version of the set, but I didn’t have the time I’m guessing. 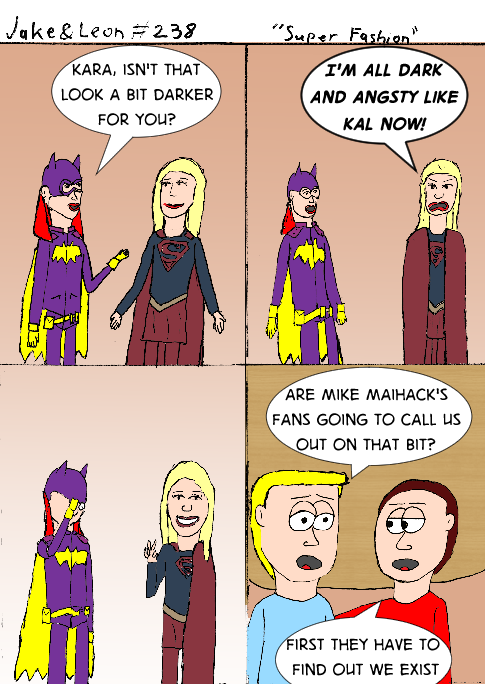 If you haven’t read his Supergirl/Batgirl comics, you really should.

I’m so glad the show didn’t live down to my expectations, or at least the pilot hasn’t. I don’t think Mike Maihack has a spot just for his fun and amazing Supergirl/Batgirl comics but I had to homage them and you need to look for them. It led to a follow-up the next week. 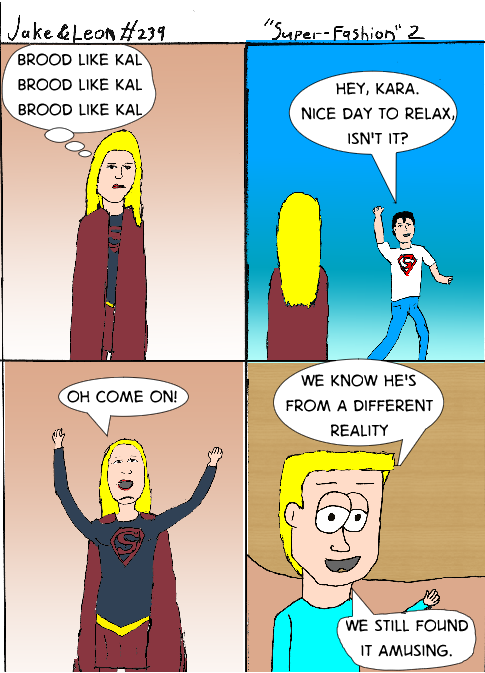 I forget where this was from, but I don’t think it was New 52. Somebody’s smiling. 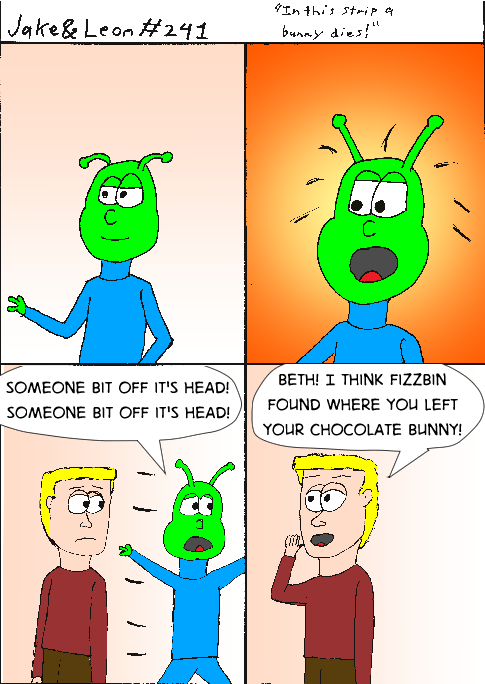 Wait until she’s introduced to Peeps.

Fizzbin apparently hadn’t seen chocolate bunnies yet. I just like the title, but I need to work on running poses or at least give myself time to do them right. 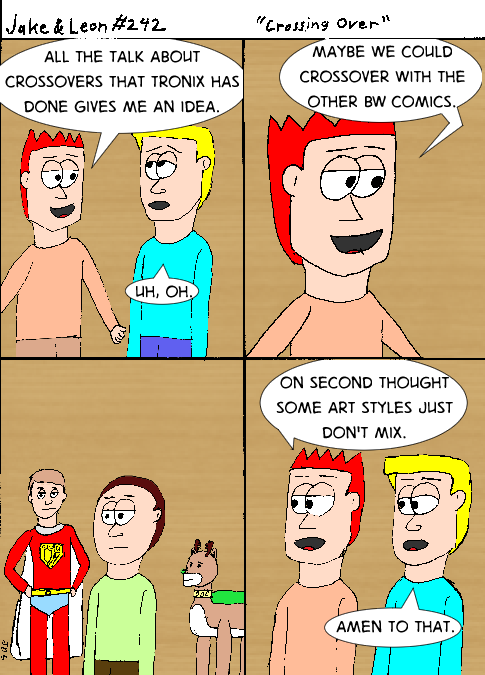 On the other hand, a Captain PSA/Captain Yuletide crossover may be technically doable.

The user of the Captain Yuletide powers change every year to match the villain so it’s hard to use him or her in the comic. So Bryce is back, and with Captain PSA in tow. I wish I came up with more Captain PSA ideas. 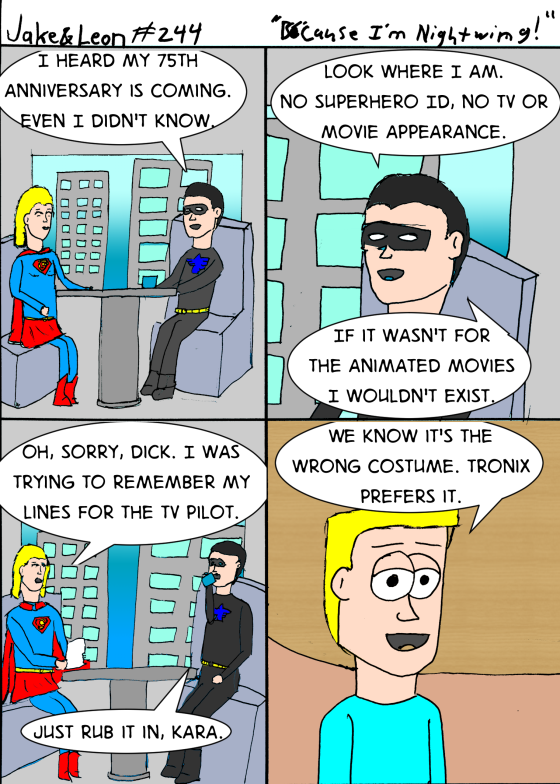 If it wasn’t for the DC Animated videos he wouldn’t be anywhere.

I’m hoping the creators of How It Should Have Ended never gets mad at me for using their “Superhero Cafe” skits like I do. I did another one this round with Power Girl and Huntress in Superman and Batman’s usual spots as well. 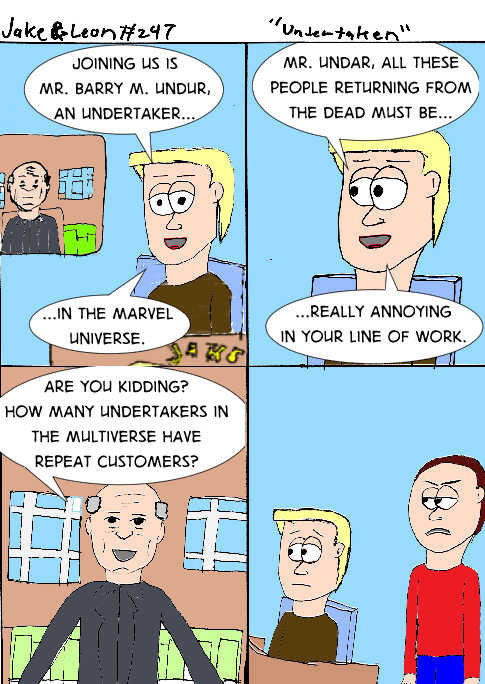 The sad thing is I can see undertakers in both the DC and Marvel universes being that jaded.

The treatment of death in comics as a lame plot device, soon followed by resurrecting the same dead as soon as they find a use for the character annoys me even more now that I’ve suffered a number of family deaths since 2013, including my mother followed by my grandfather (whom we were surprised lasted as long as he did considering his own medical issues plus losing his wife–both were in their 90s). Death and rape are two things that shouldn’t be treated so cheaply and comics seem to love doing both. 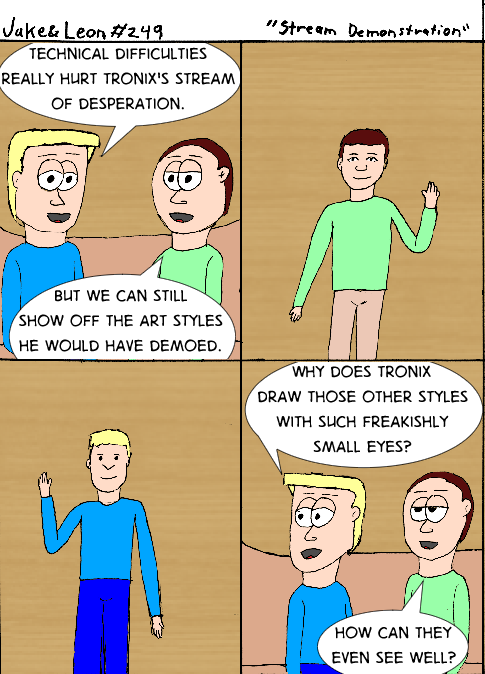 With glasses. That’s how I do it.

When I had the chance to get my debt forgiven if I could pay the rest, I tried using a livestream to show off how much work I put into this site for the articles, comics, and videos. I had one technical issue after the other and the stream ended early because I couldn’t handle the stress. Had I kept on I might have even ended up with some internet celebrity guest appearances, which might have helped get patrons to the Patreon or at least a temp boost. I was in way over my head in a year where stress and emotional hits were at an all-time high as it was. So now my debt is in the hands of a collector and I’m still in trouble. Like I said, bad year.

Still, I like how Jake and Leon came out in the other two styles I play with. I still have a long way to go with those as well but I’m still practicing. Oddly, most of my strips seem to be taking place with the regular characters rather than the parodies that allow me to practice and improve my other styles. 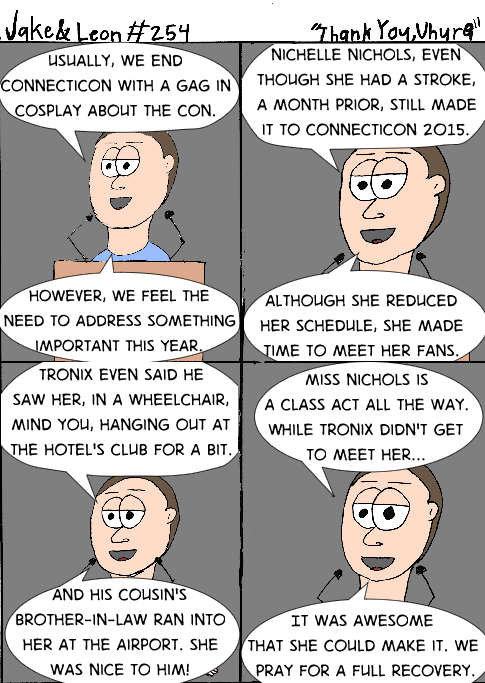 Yep, all of that happened. I saw her just as she was rolling out of the club (she was in a wheelchair) where I guess she wanted to get out of her room for a little while and rolling around at night in Hartford is not something I’d recommend. I didn’t want to bother her both as an attendee and someone who didn’t want to risk his press credentials. I hope she comes back in better health for ConnectiCon 2016 but I don’t think that’s likely. Only the voice and internet celebs make return appearances at ConnectiCon since I’ve started attending in 2009. 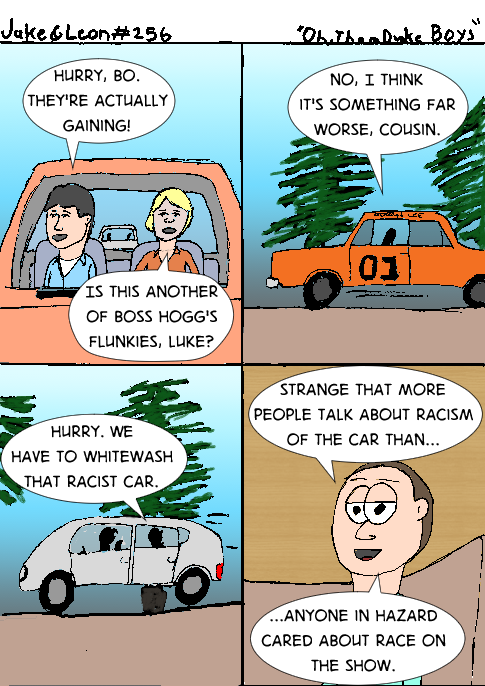 I’d say go watch the show and check for yourself, but they had the show taken down because of one flag on the roof.

Politics rarely crossed into my domain, but this has been a “special” year all over, hasn’t it? You have to wonder if the shooter had been draped in the Democratic donkey if they would have rushed to have that removed? Like I said at the time, The Dukes Of Hazard was probably the least racist show I’ve seen, especially one taking place in the South, where everything set there is In The Heat Of The Night. 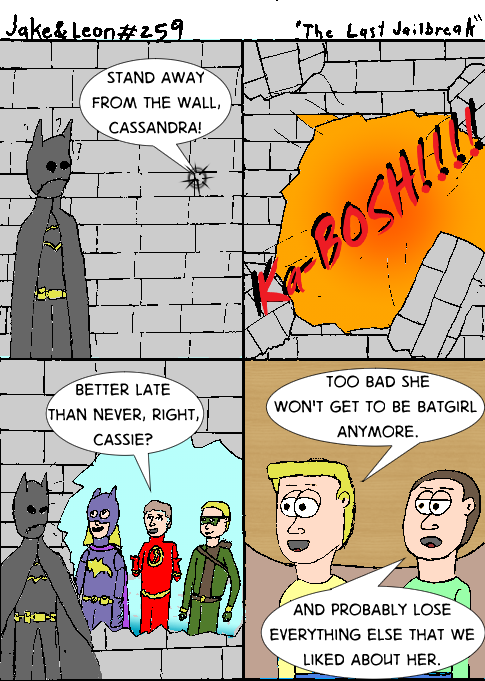 And thus a storyline concludes.

This ended the longest-running gag in this strip’s history. Although Fizzbin’s Christmas questions have more strips. 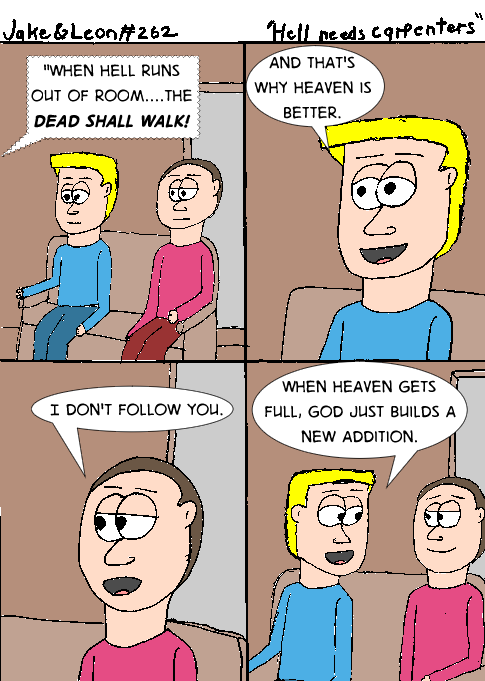 This sounded less religious in my head.

I forget which zombie movie uses this line, mostly because I don’t like zombie movies–or any horror movies not using a giant monster actually–but it just came to me, followed by this joke. Sometimes I think God takes pity on me but is still working with a bad joke writer.

And that’s my favorite strips from the sixth year of comics. Next month we say goodbye to year seven of the website, which means more article reading for a best of feature. As for the comic, I think I’ve improved since the first strip. 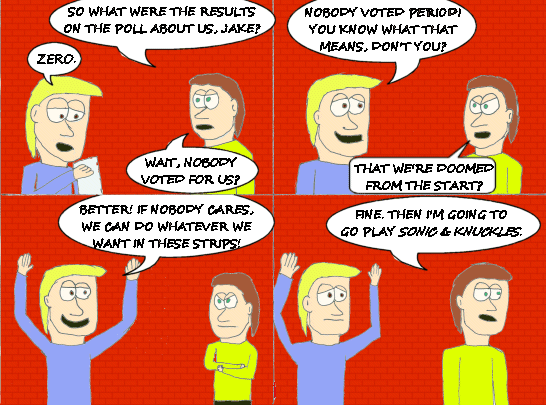