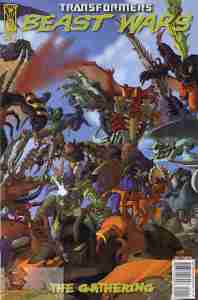 “They have the donuts! STOP THEM!

In the latter days of the Earthbound Beast Wars, Magmatron has decided to take a few rules from Megatron’s playbook. Putting his Predacon group slightly out of phase in time, he plans to build his own army, also believing the Tripredicus Council is taking too long to launch an attack on the Maximals. Lioconvoy is suspicious of Magmatron’s plans, and puts a spy in his group, Razorbeast. Razorbeast is in charge of a device that will take over the remaining stasis pods and turn the protoforms into Predacons. However, Razorbeast manages to turn some into Maximals before running off. The Beast Wars continue on ancient Earth.

What they got right: The concept here is to use the unused toys and give them their own characterization since they were never on the show. We also get a cameo from Lioconvoy from the Japanese-exclusive Beast Wars II and Magmatron comes from Beast Wars Neo, which was mostly original figures. Keeping them out of phase with the regular events allows them to understandably have access to the stasis pods and might explain why they weren’t seen being collected at the end of Beast Wars: Transformers. (Although I think there’s a deleted scene for that.) The art is beautiful, as Figueroa’s Transformers art was before he started combining movie aesthetics with classic Transformers ones.

What they got wrong: But if the comic is supposed to take place in the same continuity of the show, so the Japanese cartoons, so unless Magmatron still wanted to conquer the Maximals after the events of Neo (which I’ve only read about since I’ve only caught the first few episodes) there might be a continuity issue. I’m also concerned that Furman is dropping in too many characters for this miniseries. One of the benefits of Mainframe only being able to render a small group on both sides was that there was more time to focus on those characters and flesh them out, even occasionally on the Predacon side. That’s going to be harder here and this miniseries was it for IDW’s foray into the Beast Wars. And of course Furman has to get his “it’s over…finished” in there somehow.

Other Notes: I wonder if this was at least based on the story planned for a Dreamwave Beast Wars tale, as teased in the Summer Special?

Recommendation: It’s a good start, but this is Simon Furman, and his starts don’t always have the best finish. I suppose it’s a least worth a curiosity look. Otherwise, we’ll see as things go on.