I don’t have issue #2, but if you want to find out on the last story arc ends Linkara reviewed it. And I wish I owned it. 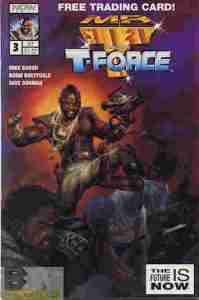 The leader of a car theft ring doesn’t like to be displeased, or have the heat come on him. However, the wife of a mechanic he’s forcing to work for him goes to Mr. T due to how suspicious he’s been acting and worried about him. T infiltrates the gang, but the leader’s leader told him to be ready, and has a killer truck waiting for him. I have to show you this thing.

Imagine seeing this thing when you call for a Uber driver.

What they got right: If you’re going to have Mr. T running around I think Chicago since that’s where he’s from (I don’t think the comic ever says) with a big camcorder, have fun with it. Have Mr. T beating fools down with one hand, and facing a killer truck. Baron knew that and did that. He even tries to help the mechanic whose wife went to T for help.

What they got wrong: Are you kidding? Did you read anything I wrote? Why would you think there would be anything wrong?

Recommendation: I want the rest of this series real bad. This is what a Mr. T comic should be. Sadly this is the last one I own and Linkara hasn’t gotten to the fourth issue so I have no idea how it ends. Someday that will change and I’ll share my findings with you. Unless you already go out and read this comic. Which you should.