First of all, slight change in plans. I am going to review the He-Man/Thundercats crossover as I usually would, taking up the next two Saturday spots instead of the Adventures titles. It just seems the right way to go about it because I don’t want to spoil too much of it at once (being a Today’s Comic review of fairly recent comics). Plus I need the extra space because this has to be a two-part review.

So what are we doing today? DC Adventures. Remember how I put Adventures In The DC Universe in with the DCAU comics even though it’s set in the regular DC continuity of the time? Well, this mini-event is the reason, a storyline that doesn’t require all three issues to read but does connect between the Adventures titles, including Batman & Robin Adventures and Superman Adventures. There is a medallion that ties the three together, as well as the origins of the DCAU versions of Batman and Superman. I could review them individually but seeing as this storyline is what combines them I wanted to examine the implications further…if there are any. We’ll begin with the first comic in the set. 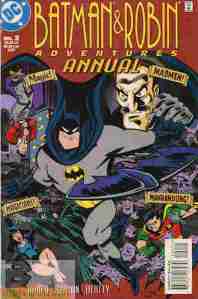 While Batman and Robin are thwarting a jewelry store heist someone breaks into Wayne Manor and steals an amulet. Checking the security footage, Alfred let the crook in after getting a call on the phone that put him into a trance. It’s hypnosis, and when the Dynamic Duo find the thief he’s in the middle of a nervous breakdown. Batman is sure the man behind it all is The Hypnotist, a man from Bruce’s past. Back during his training to become Batman, “John Smith” was being trained by Zatara and his daughter, Zatanna. (This would later be made canon in the DCAU proper although not this storyline specifically.) While there a hypnotist tries to recruit him but Zatara warns him off since he uses his gift (unaware of how strong it actually is) to commit petty larcenies. By the way, I’m giving you the whole flashback in one chunk. The comic weaves it into the story along present-day events.

The Hypnotist overhears Zatara telling “John” about a pair of amulet that hold great power. Later that night the Hypnotist tries to steal them, but there’s only one there, which he finds (or rather believes) boosts his hypnotic suggestions, putting Zatanna under a trance when she catches him and later “John” when he shows up to stop him. We also learn Hypnotist is attracted to Zatanna. (Who isn’t? Besides women, gay men, and little boys who haven’t reached puberty yet.) Zatara teaches “John” how to resist the Hypnotist’s voices, which tricks the villain into thinking he’s lost the power. Later, Zatara uses the amulet to talk to a man named Clark and make something appear in a box. As you can guess, this will be important in a different chapter.

In the present the Hypnotist somehow “found” his voice and believes that as long as the amulet exists so does his powers, realizing Zatara taught “John”, whom he recognizes as Bruce, how to resist him. Not knowing Bruce is Batman, and with Batman now ready for him after previous meeting, Batman goes to warn Zatanna, who is in Gotham for a show, about the Hypnotist’s stealing of the amulet. And because she’s a showperson the show must go on, and guess what? No, come on, guess. It only happens in every story where a character insists on going on with the performance despite a warning that a villain is coming to get them. Yep, she gets kidnapped, with Batman unable to save her. Typical.

Using a tracking device planted on her, Batman is able to track them down, where the Hypnotist tries to convince her without his powers to hook up with him. She refuses, and I can’t imagine why. The man’s evil, not very good-looking, and kidnapped her with hypnosis. Batman arrives and since he believes having the amulet anywhere means he still has his powers, Zatanna uses her magic (stage or mystical is unclear) to make the amulet disappear, again making him think his powers are gone. He’s taken to jail and a few days later Bruce gets a gift from Zatanna’s next stop, Metropolis. It’s the amulet, which is put back in his vault.

Of course there are a few questions. Who was Zatara talking to when Bruce returned the amulet to him, and what did he make appear in the magic box? That’s where our next comic comes in. 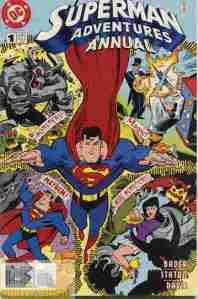 Clark has been having nightmares of someone calling out for his help as he’s being attacked by demons. Waking up to handle a fire, he sees Doctor Fate in the flames, begging for his help in the demon plane. Superman’s been there before, but I’m getting ahead of myself. Racing to the Fortress Of Solitude, Superman grabs the other amulet that was in Zatara’s drawer and races back to the fire. You see (and I’m combining flashbacks again), Clark went to Zatara seeking help in overcoming magic, one of his weaknesses that isn’t a glowing piece of his home planet. Going by John Smith (I wonder if all of Zatara’s students used that name?), he learned well until it was time to travel to a plane of weak magic, using the blue amulet to crossover, but needing the red one to return home. As Clark learned to deal with the lesser demons two things went wrong: some of them merged into a new, more powerful demon named Akamin and the Hypnotist first stole the red amulet, leaving Clark with no way home. See, I told you these two were connected.

Akamin recognized there was power in the blue amulet but Clark fought to protect it. At one point Doctor Fate arrived via boom tube with a small boy (I’m afraid you’ll have to wait until tomorrow to see what that’s about–I’m running long here), not being able to do much to help for whatever reason but leaving him a rather effective blaster…at least until a hand reaches through and takes it from him. Luckily, the other “John Smith” had rescued the other amulet by then and Zatara was able to bring Clark back home. Akamin searched between the barriers for years trying to find him in the mortal plane, while Zatara gave him the amulet for safe keeping just as he did Bruce with the other one.

Now in the present, Akamin is pretending to be Fate, and successfully tricks Superman into bringing the amulet to the demon plane and snatches the blue amulet. Remembering the spell Clark used, Akamin escapes to the mortal world but becomes human…albeit with superhuman strength and his magic intact. He summons his minions, who are also turned mortal, but Superman needs the red amulet to get home, and doesn’t know Batman has it, or the whole deal with the Hypnotist. In the show continuity he hasn’t even met Batman yet. (That will be changing very soon.) Then the boom tube opens again with Fate and the boy, which immediately closes, but with the red amulet now appearing before Superman. Supes thinks it came from Fate, but it’s actually where Zatanna sent it. (She did say that she doesn’t know where things she teleports with that spell goes to. I bet that audience member’s silver dollar is around here somewhere, too.)

Returning to the mortal plane, Superman heads off after Akamin, who has kidnapped Lois. Lois, in the meantime, has managed to knock the blue amulet from Akamin’s hands and get out of her restraints. She may be in over her head, but she has some idea what to do. Superman arrives, and uses the magic of the amulet, combined with his…I think X-Ray vision to attack the mortalized demon. As they play back and forth with the amulets, Superman manages to open a gateway to the demon plane, where Superman tells Lois to reach in and grab something. It’s the blaster from before, because space and time are all screwy in there. Akamin absorbs the lifeforce of his minions and creates a monster from the garbage, which Lois blasts with the cannon. However, Akamin manages to get the red amulet…but the blue one has already been swiped, by Doctor Fate (who was elsewhere and only just learned about the situation). He instructs Superman how to send Akamin back to the demon plane and everything is back to normal, Fate wiping Lois (and I’m assuming everyone else)’s mind of the events before transporting Superman back to the Fortress to rehide the amulet.

This is only the first two issues of this crossover, and so far I like what Bader has done. You don’t need both issues or the Adventures comic we’ll be looking at tomorrow to enjoy either story, but by reading both annuals you get the full story (even if Batman and Superman don’t) of the amulets and what they can do individually as well as together. It’s a way to bring the heroes together while still keeping them separate, making the meeting in “World’s Finest”, the episode/movie (as The Batman Superman Movie) in which they meet for the first time. And it’s not over yet. Adventures In The DC Universe features a number of stories that claims to connect to these two, despite being set in the regular DC Universe. How well does it do? Tune in tomorrow for the finale to this event.