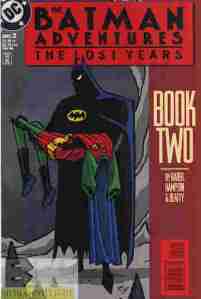 The Batman Adventure: The Lost Years #2

The Joker has a device that can cause havoc with airplane RADAR, but the unaware Dick is ignoring the pager. Batman needs backup and Barbara offers, as Batgirl. While Dick saves a man under attack, he almost hits the man when he comes up behind him to answer. Still believing Batman attacked that one goon in front of his family out of anger (the episode adapted in this miniseries shows he actually scared the man straight and Bruce Wayne gave him a clean job), he ignores the man telling him it’s okay. Dick isn’t sure he wants to be Robin anymore but when he learns Barbara/Batgirl is out with Batman, Robin rushes out to help her. They stop the Joker (not realizing that a young boy who will become important later watched the whole fight), and Robin reads Batman the riot act, convinced he manipulated Barbara to join him. Dick Grayson quits being Robin with a punch and leaves to find his own place in the world.

What they got right: It may be a kids comic (granted for older kids than most versions), but it can still give some great moments, like Dick’s fight with the thugs and his reaction to almost hitting the man he tried to rescue, or how he tells Batman off, aided by a nice shot as Batman looks like a shadow of sorts against Robin and Batgirl, which is how Robin is seeing him at the moment, tired of his obsession with fighting crime to the detriment of a personal life Dick now wants. The fights are really cool.

What they got wrong: I’m not sure why the Joker shoots his own machine. It’s not like he missed and the explosion ends up knocking him out. I know he’s nuts but usually within reason. Maybe if I could rewatch the episode it would make more sense but that’s a little difficult currently.

Recommendation: Even if you have the series from the WB years you still want to have this miniseries as we’ll later be filling in gaps from the episodes. Plus it’s just a darn good Batman comic.