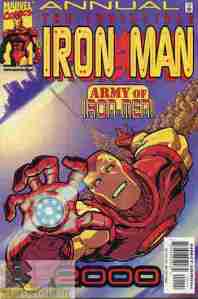 “The Sons Of Yinsen” finale: “The Invisible Iron Man”

Continuing from volume 3 #32 Tony and the Sons of Yinsen are now prisoners of Wong-Chu and he is enjoying tormenting them, even giving Sun Tao one of his marks. As he leads them to their deaths, Tony manages to combine a cloaking chip with his mechanical heart, allowing him to escape. He gets his armor back but Wong-Chu uses the armor pieces stolen from the Sons to make his own escape after damaging Iron Man’s chip. Using his own stolen chip Wong-Chu battles Tony where Yinsen is supposedly being kept but Tony figures out a way to defeat him using the Shellhead drones. The Sons try to reclaim their mentor but one of them is killed and a young man who secretly loved her kills Wong-Chu in revenge just as Tony’s mechanical heart shuts down. He awakens on New Timbetpal to find all that remains of Yinsen is his brain, from when his body was taken by The Great Salvager (aka Doctor Midas–I think, it’s not really clear). Tony is thanked for his help and the boy takes his lost love’s place on the twelve while New Timbetpal heads to the island where the sentient armor was buried.

What they got right: I love the artwork here. The classic armor never looked so good. I liked Althea Martinez’s first bit of artwork for this series when she substituted for Sean Chen but comparing her last issue to this one I want to see someone from this art team take over or at least work with her. The conclusion is satisfying and Wong-Chu hopefully stays dead…

What they got wrong: …but the climax is not so satisfactory. This kid who loved the killed monk comes out of nowhere, sneaking himself into one of the drones (so the drones are also armor?) and kind of takes the victory. The stuff about the “great salvager” feels forced in just doesn’t connect. I’m also bothered that the comic seems to be focusing too much on Tony’s past rather than pushing towards the future lately and I’m hoping Quesada gets off of that kick soon or leaves the title. Given his more recent actions with Spidey and the direction he took the Marvel universe (not that Axel Alonzo was any better and C. B. Cebulski has oddly taken it off the rails) I’m leaning more towards the latter.

Recommendation: Overall I enjoyed it but there were some things that didn’t work as well as others. A mixed bag ending really as the end itself was satisfying but the climax leading up to it wasn’t so much. Still, it’s a story worth looking into.