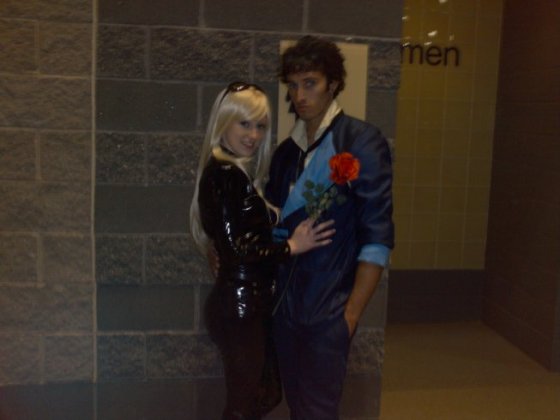 I always hoped Spike and Julia would meet again in Heaven. Or Hell, knowing those two. 🙂

The Cartoon Cypher recently put out a great editorial about the ongoing anime debate between supporters of subtitles and people who prefer the dub. However, because I tend to reach out to casual as well as diehard fans of the works I review and discuss I want to build up to it with a few other editorials that I think frame the dub perspective perfectly. And looking at the dub for Cowboy Bebop is a great place to start.

Even if you aren’t part of the anime fandom I’m willing to bet many of you out there have at least heard about this show. The series follows a group of space bounty hunters who come together through a shared sense of brokeness, eventually going their own way once they found a part of themselves that they lost. Or for Edward, because it was a Saturday in July or something. She’s fun. While sub-only purists may discount this, the Cypher team goes over why the dub works so well and why it’s airing on Toonami drew so many who find it easier in dub to anime.

If you want to catch more of these, check out their YouTube channel.

Over the next few weeks, although I won’t be necessarily posting one a week but more when I have the opening, I plan to post a few more leading up to the review in question. Note that neither the Cartoon Cypher team nor myself are promoting dubs as the only way to enjoy Japanese animation, or even other works from other countries. This is more to explain why some of us prefer dubs and to counter some of the arguments by the sub-only crowd. Ultimately, whether you watch with subtitles or dubbed in your home language is really up to the individual watcher. Enjoy the experience you prefer but understand some of us prefer a different way and it isn’t necessarily wrong. That’s what I hope to show through posting this set of videos. Next time I want to look at their discussion of a dub that was intentionally off the mark and somehow beloved. Tell me…do you like ghost stories?