Technology has allowed us to advance in many ways, including in storytelling. With broadcast and recording equipment we can bring stories to a wider audience. Silent movies allowed us to take the world of theater and bring it to everybody with the same performers, then they invented a way to record audio and create the “talkies”, the way we watch movies today, although processing color would come later. Until then you had someone near an organ playing music that went along with the film, although I don’t know for sure if that was true everywhere.

Meanwhile another medium was being born, the radio. Sitting in a studio you could broadcast your show to everyone within range of the transmitter, later enhanced by stations that could capture the signal from farther distance or be given recordings and playing them within their own circle, serving as a relay to get broadcasts around the country or even around the world with a strong enough transmitter. You didn’t come here for the science or history of broadcast and I’m just trying to fill in the intro so that’s probably not an exact description. The point is this was used to bring music and news to the masses but it also brought the precursor to the TV show, the radio show.

Sometimes done in front of an audience and sometimes just in a recording or broadcast booth, you had comedies, soap operas (in fact General Hospital started as a radio drama and you can find those old shows on the Internet Archive), science fiction, horror, crime dramas, and shows for kids, adults, and families. It’s where the Shadow, the Lone Ranger and Tonto, and the Green Hornet got their debut. Most of Superman’s iconography came from comics but the old audio dramas deserve a lot of credit. This form of storytelling fell with the invention of television but never really went away. It just evolved into things like book and records, audiobooks, and on occasion original stories. As the way we share recordings changed, eventually the audio drama made a comeback. While not nearly as widespread as it used to be, with most radio stations only playing music, hosting talk radio, or carrying sports, it has still managed to remain an important method of storytelling, because like every other format audio dramas (and audio comedies, but I’m just going to stick with the one term) has it’s advantages for both the tellers and the tellees. 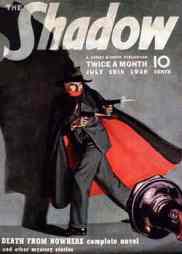 The Shadow as depicted on the cover of the July 15, 1939, issue of The Shadow Magazine. (image source: Wikipedia)

For the creators it’s really easy…or is it? Sure you don’t have to worry about sets, camera angles, clothing (although if you aren’t in a nudist colony please wear clothes to your recording session, thank you–management), or make-up. All you need are some good microphones, a place to record that doesn’t echo, and your actors. Sound effects are also important. Foley artists come up with a lot of tricks to mimic real world sounds when they can’t record them. Back in the day the Foley artist had to have stuff in the studio that wouldn’t drown out the actors but also wouldn’t break the immersion, but now advances in digital technology means a decent sound bank and program makes it easier to put together, though there aren’t many live performances these days so that also gets cleaned up in editing. The internet means that with a good connection you don’t even need everybody in the room. Cameras so you can see everyone is optional but I’m sure has the advantage of them letting you know your audio cut out or seeing what everyone is doing. It’s easy to make a home studio and a number of professional voiceover artists have them. Everything’s coming up roses, right?

Well, hold on a minute. Recording an audiobook is one thing. You just need to have a voice people want to listen to and can read dramatically without overdoing it. With a full drama, unless you’re Frank Welker or Jim Cummings you are going to need other people, and they all need to act. Unless you have friends willing to do it, you’ll have to audition. No sweat? Well, then you have to think about the script. Since there are no visuals (unless you’re doing a show online where you can have at least images representing a location or action) you have to be able to get across to your listener what’s going on. Shows that haven’t held up since the old radio days or even shows made today and don’t work are often due to clumsy dialog trying to explain the audience that the killer is coming down the alley and you’re blocked off. If you don’t have narration you either have to pull this off with the sound effects or try to have characters standing there narrating the whole time they’re about to die.

Oh no, I’m trapped in this alley. And here comes the killer. Is he wearing all black? That’s not a knife, it’s a dagger. Oh no, that look in his eye, like he wants to cut my throat. I think he is going to cut my throat. I have no where to run, there are no windows or doors and everything is brick. He sees me. He’s coming for me. No, stay away with that dagger! I can see the blood of your past victims. Stop laughing. Nooooooooooooo

Part of that sets up atmosphere and part of that is just exposition. And if you don’t mention that the end of the alley is blocked off the listener is like “stop talking about the killer out loud and run you stupid woman!”, probably making fun of your victim all the while. Your characters are essentially doubling as narrators unless you have a narrator to tell the audience what’s happening. Don’t explain enough and the audience is confused. Explain too much and the audience is bored. The actors also need the right voices, the sounds need to sound right, and the music has to give the proper mood and atmosphere. You have to make up for the lack of visuals without being clunky and exposition-heavy. 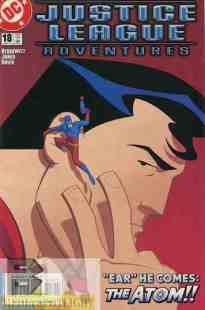 Before portable radios with headphones or earbuds really tiny people read a book into your ear. Untrue story.

For the listener there are also advantages to audio dramas. When the weather isn’t too cold or too rainy I try to go for walks, originally for my recovery and now because I spend too much time in this chair writing, drawing, and editing. Before winter hit I started listening to old Blue Beetle episodes, making sure the volume wasn’t so high that I damaged my earbuds or my ears and could hear a car coming. Back in those days you didn’t have portable radios and if you did walking down the street listening to it would probably annoy people. You could listen in the car while driving provided you still paid attention to the road. You couldn’t get away with that while reading the original comic books. You can have them on in the background as you do your work and not be as worried about missing something important because you weren’t watching the screen. Nowadays you have the advantage of pausing and rewinding if you miss a line. With the creators not needing as big a budget you can get stories you might not otherwise. Big Finish Productions have done audio dramas with Doctor Who actors who look a lot older than they do now but set the stories before the Doctor regenerated, and a good enough sound-a-like can play any characters whose actor has retired or passed on. Unless you can hear the age in their voices you have an adventure you wouldn’t have otherwise. I’ve also heard people praise audiobooks when they don’t have time to sit down and read a full novel, are blind, or are possibly dyslexic.

Of course you have to be able to pay attention to what your doing while listening. I don’t recommend putting on comedy while doing brain surgery, and I mentioned that driving issue and being able to hear a car behind you while out for a walk. It’s up to the writer, actors, sound people, and the director to create the setting in your mind, but that’s a problem for prose and campfires too. Some are better at it that others but you still have to be able to pay attention to the whole experience, especially if you’re trying to solve a mystery along with the characters. Audiobooks also tend to have one person reading the book (though on occasion a second person comes in for various reasons) and while the reader does have to act out the dialog to a degree it’s not quite the same experience as an acted out audio play with actors, music, and sounds. (Then again some professionally made audiobooks have used music and sound effects.) I did once use an audiobook version of a novel to better understand what was happening in it though, so the next time I read the book it made a bit more sense to me. Do you get the abridged version or the full novel read? That’s up to you.

In short: Doing an audio drama doesn’t require you create sets but does require you to create settings in the listener’s head. They’re good for listening to stories while you do other things but require more attention than music. Audio dramas offer a good storytelling experience for the right person so keep that option open. You might be able to lose yourself in a world made only to exist in your ears and in your mind.