Choose The Next Chapter By Chapter Book To Review

I have a lot of books in my collection and going through them is a lengthy task. It’s made harder when I have to write two or three articles a day (well, choose to anyway), work on a comic strip, and find time to make videos and take part in other projects. So I started an article series called Chapter By Chapter. Easy setup really. I go over it in the intro for each installment:

I don’t know if anybody actually reads along when I do these reviews as only one book got any comments well after the fact, but I do know people enjoy the article series based on the fact that it gets more likes than the other articles I post during the week more often than not. So I know you enjoy the series, which is why I want to ask for some help with it. For the sixteenth installment I’m torn between three different books I’d like to read next but I can’t nail just one. I’m not going to go into heavy detail of what the book is about. That’s what the reveal articles for the next book is for. Instead I’ll touch on it a bit and why I want to read it. From there I’ll have a poll where you can choose one book. The other two will still be reviewed in the future and maybe even in the order voted on but I want to know which book would garner the most interest. If you voted for all three it wouldn’t help me much. Thus here are the next three books I’d like to use for the next Chapter By Chapter.

First handshakes were outlawed, and not fist bumps are the devil’s contact. I’m betting the elbow will end when people finally realizes how stupid it looks.

BattleTech: I Am Jade Falcon by Robert Thurston

Already in this website I’ve reviewed various comics based on the tabletop RPG. I apparently STILL need to review the cartoon for Saturday Night Showcase (I keep thinking I already did…guess what’s coming up this week) but I did review the RPG sourcebook that tries to shoehorn the cartoon into the game’s narrative. I haven’t played the games and when I try to play a demo for the video games I suck eggs, so I only know so much about the story. A group of Earth space colonies are cut off from their origin world and soon devolve into warring houses for control of the system. Later, FASA opted to toss in a third column, the “Clans”, descendants of the original protectors of this area, the Star League, who left after watching these idiots constantly destroying themselves. I can relate. However, they return with an odd take on war, setting ground rules for X number of troops and challenges, like they’re playing some kind of game, and there’s a bunch of other stuff to save for the review.

I have thus far reviewed each of the BattleTech media I own (the cartoon I’ll have to find online) except for this novel. Set after the Clans have made peace with the others in the inner sphere one member of Clan Jade Falcon, the prominent clan in the cartoon and thus the most well known to casual fans, is trying to reclaim her honor. The Blackthorne comics were created before the addition of the Clans and the Malibu four issue miniseries had the clans but didn’t focus on them. This will give us a look into the clans and it’s sort of unfinished business for me as the last bit of spinoff media I have to review. I’m really curious to revisit this one.

number of chapter: 32 + a prologue and epilogue

I should note that while the chapters appear short this has some rather small text. Just the same I see this being one that potentially will have multiple chapters reviewed at the same time depending on how long it takes me to read through it. Still, this will take time to go over but I seemed to have grabbed three long novels. 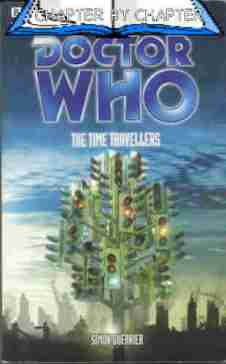 No wonder traffic is backed up today!

Doctor Who: The Time Travelers by Simon Guerrier

If you read the comments you know my friend Sean has been pushing for me to review one of the Doctor Who novels adapting episodes of the show. While I don’t have a full collection I only have one that I own the DVD for and unless it shows up on the Pluto TV channel it’s unlikely I’ll be able to watch any of the others. I’m saving that for another project in the future. So I’m sending him, and by connection you, a bit of a loophole. You may know about the time when there was no new Doctor Who episodes, so fans turned to the novels. (Speaking of Saturday Night Showcase you may remember me showing off The Pop Arena’s Crossing The Wilderness, which goes over books from that time, referred to by fans as the “wilderness years”.) This doesn’t quite come from that period and it’s a bit different because it actually stars the first Doctor (I don’t care what “The Timeless Child” says) and his original Companions of Susan, Ian, and Barbara. I’ll get more into that in the reveal, whether it’s this round or one of the next.

This story has the TARDIS arriving in the far-off year of 2006. The book was published in 2005 but it treats the story like it would have been done in the 1960s, just with a bit more understanding of how the future should be. Except it’s not how the future should be and the crazy stoplights up there are only one of the problems. I have been wanting to do a Doctor Who story for Chapter By Chapter but the novelizations are not currently an option so this is my only option at current as it’s the only original story among my novels and I’ve already reviewed all my comics. I think it will be interesting.

number of chapters: 13 + prologue and epilogue

This one seems to have some rather long chapters so if chosen I’m going to have to really dedicate some time to it. 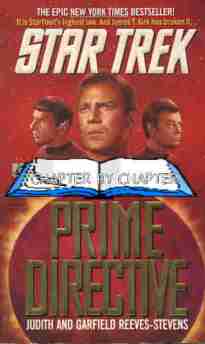 Looks rather holy for Kirk the Godslayer. I don’t think the Chapter By Chapter logo placement helps.

As far as which of my many Star Trek and Next Generation novels to choose, this is just next in the lineup after Enterprise: The First Adventure. I haven’t reviewed a Star Trek novel since then and I’ve been wanting to do another one. There’s one I really want to get to but I put these in a certain order for a reason and I want to see if I was right. Reading them in the order on the shelves seems the way to go, but I also really don’t remember this one. I wonder if I even read it yet? It wouldn’t be the only book I picked up but never had the chance to read.

All I can tell from the back of the book is that it takes place on the planet Talin, where apparently everything went to heck, Kirk has gone missing, the Enterprise somehow exploded early, and the crew members we care about head back there to try to fix things or something. This would be the first time I went into one of these reviews almost totally blind. Even with Tom Clancy’s Op-Center I had some idea what the plot was. I’m kind of anticipating this one but I’m not sure if it’s positive or negative. I’m that clueless what I’m walking into here, which should at least make for a great review.

That’s going to take some math. The book is split into four parts (I did say I seemed to grab three of my longest paperbacks), the third of which has about 13 chapters I think, while the fourth and final has only two. The other two chapters have roughly seven or eight each, plus there’s a prologue and epilogue. This should at least be interesting to review, but I have no idea going in if I’m going to like it or not while I remember enjoying the other two when I read it. (Although it took me a long time to read the Doctor Who novel just because of what was going in my life when I was trying to read it, so it took forever.) This one I don’t even remember reading so either I did and the story is that forgettable or I didn’t and this will be a new experience for me.

And with those choices explained it comes down to you to decide which book I review. Yes, they’re all part of a licensed franchise but each offers something a bit different. A book exploring a warrior group with their own culture getting a long with a group closer to ours but still based on outdated concepts, an original Doctor Who story involving more time travel than usual, and a Star Trek novel I don’t remember having read. Which would you like to see me talk about next? (We know Sean’s answer but I want to get all the readers in. Don’t let Sean alone choose!)

You have one week and I’ll reveal the answer (because I only have so much control of the length) next Wednesday, though the reviews will continue on Mondays as usual. Choose the one that most interests you, especially if you have the book and want to join in the discussion. I would love to make that happen.