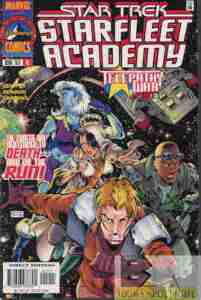 “I know what we forgot…our spacesuits!”

Nog is sent to Deep Space Nine to do his sophomore year in the field because they don’t want to kill their first Ferengi member of Starfleet. The others are still put to death and when rallies break out demanding answers and Omega Squad’s freedom, Pradesh wants to speed up the execution. Zund and a few others start putting clues together and suspect Pradesh may be a shapeshifter and work to restore Edam’s mind, while Yoshi and Boothby help them escape. It’s only a few days before a Federation starship catches up to their runabout but the Romulans help in their escape (though the Squad chases off the Romulans) because they have something important on that ship and the Tal Shiar doesn’t want her damaged. Now our group heads to the only other place they have an ally in warning Starfleet about the upcoming attack on telepaths, namely Deep Space Nine. Meanwhile, Admiral Decker, Matt’s father, calls in the Enterprise for help. [Continued in Deep Space Nine #12.]

What they got right: I’m not against a crossover event done right, and so few of them were even at this point in comics. As I recall, “Telepathy War” was a good example of how to do it right, so we’ll go over that over the next few weeks. Using Starfleet Academy as the stepping stone in light of what the show was doing during the Dominion War at the time, when the Dominion was infiltrating Starfleet. Between this and the previous issues having the Squad learn about the intended attack on telepaths since they could instantly pick up on shapeshifter doppelgangers the stage is set for a crossover that will include all of the Paramount Comics Star Trek titles.

What they got wrong: We’ll get into the one that fails that when we get to it, so let’s focus on this issue. They might as well have just gave away the entirety of T’Prell’s secret at this point. It would have been better for the Tal Shiar agent to say “I have my reasons for protecting them, just follow orders”. The focus should be on the crossover, not this subplot. They handwave away Pava not needing crutches anymore a bit too easily.

What did I think overall: This was the best series and storyline to lead into a crossover given what was going on. It’s off to a good start and I hope it concludes as well as I remember.