The Many, Many Intros Of Superman: Smallville 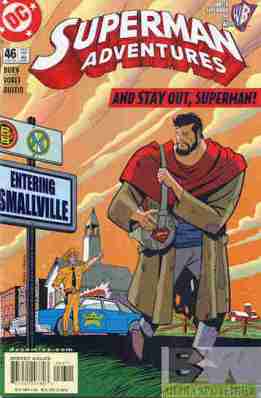 Almost forgot about this one. I guess we’ll save the finale for next week, because I almost forgot Smallville…possibly because Smallville forgot to be Superman’s early years a few seasons in and became the origin of The Blur. Created by Alfred Gough and Miles Millar, the show decided to do yet another origin story for Superman, or rather Clark Kent as the closest we ever get to seeing him in costume (I guess Tom Welling thought the costume was the source of the “Superman curse”) was a bit of special effects work in the last few minutes of the series finale. I lost interest in the show after a few seasons so I don’t know a ton of what happened after they started creating the Justice League early, having heros that should post-date Superman’s first appearance coming in while Clark wasn’t an open superhero, and looking less and less like he would ever become Superman. Killing off Jon Kent didn’t help matters any, since this was still a movie thing (Jon and Martha are supposed to die together, something even the comics eventually forgot–Snyder couldn’t even get that right with Jor-El and Lara). So I don’t have a lot to say about the show this time around.

I’m also not going to break out ten intros, since the show lasted for ten seasons. I found a video (and hopefully it’s still up when you’re reading this) that puts them all side by side. I’ll break that out and then grab three specific intros to talk about them directly. This is mostly because I don’t want to run this theme song so often that we forget how awesome it is.

“Save Me” by the band Remy Zero (who actually show up as a prom band in one episode still using the same name) is actually the perfect song for this show. Being a typical CW teen angst with a paranormal gimmick show, and one of the founders of that subgenre if we’re honest, the song hits the right tone for both that and a show supposedly about Superman. What does he do? Saves people. The song itself is about a man whose life is crashing down and is seeking someone to lift him back up, which also fits Superman as well as the themes of those shows that are usually what people think of when they think of a CW show despite not being the only type of show they offer. Just most of what they offer.

Now if that video is still up you can see the first three seasons are basically the same. While only the next six are in there, for a total of nine, I’m guessing season 10 either didn’t fit in there or just didn’t have a significant enough change. It’s also possible because I didn’t check the dates that season 9 was the last one available when the video was made. I’m only going to look at three of them: seasons 1, 5, and 10 because they’re nice round numbers.

Wow, Smallville looks like a horrible small town to grow up in now that I look at it. Without the context of the show we have a place pelted by meteors, our first listed character crucified with a glowing necklace, and a car going flying without superpowers. On the plus side they try to make the images behind the actors match something about their characters, though you can’t really learn much once you actually know them from the show. Some work but you’d think Chole was a master student who loved school, not that she’s a reporter who specialises in the weird, which thanks to the Kryptonite of this continuity turning humans into some kind of metahuman and getting them to do bad things happens quite often in this town. Maybe it isn’t a good place to live?

Also, race-swapped Pete Ross (and yes, I also noticed Kristin Kreuk isn’t a redhead, continuing a trend that happened again this week with Batman’s Carrie Kelly) is wearing a football uniform but shown by a barn. Whitney, who like Chole is original to the show as far as I know, is playing football in the rain, showing his dedication to football. Lex is in front of a castle that somehow was transported to Kansas, while Clark is shown in front of the meteor shower that followed baby Kal-El to Earth. For some reason Martha gets an empty building with a window broken (or it looks broken to me) and Jon gets a weather vein, when he should be the one in front of the barn, given that it’s his farm and not Pete’s or his dad.

We don’t get to see a lot of Clark’s powers or fighting “kryptomutants” as I call them. However we do see stuff on fire, and again, Clark shirtless and crucified, the “S” standing for Smallville. Whitney thought Clark was getting too close to Lana because in this version Clark pines for Lana instead of the other way around like the comics at this time in order to make him look even more sad and lonely. Look show, I want to be more like Superman, not have Superman be more like me! But I’ve said too much, so let’s jump ahead to season five. By then the visual changes started in season four take hold and we get a new look.

This is actually an improvement. We see a moment of the characters being themselves before jumping to a more stylized credit. Plus we actually get to see Clark doing some heroics and glimpses at some of the other weird things that go on in the lives of Clark and friends as well as the growing Clark/Lana relationship. Lois is in the cast now. Pete left in season two and I’m not sure when Whitney disappeared (no really, I forget if he joined the service or got hit by a tornado in one of the season finale cliffhangers and I’m not invested enough in this series to check). This is a visually better intro than the first three seasons, and it’s the one they continued into final season.

This intro highlights one of the reasons I stopped watching the show long before this. Clark STILL isn’t Superman but Oliver Queen is Green Arrow now? Also showing up were the Flash and Cyborg. Barry wasn’t a teen when he got his powers (I don’t think we’ve had a live-action Wally, not counting his Didio-born race swap from the New 52 in comics) and Victor doesn’t get turned into a cyborg until long after Superman shows up. Instead we only get Superman in the last few seconds and in a time-travel story where Welling STILL doesn’t wear the suit. I used to like the show until it refused to pull the trigger. The show’s moved to Metropolis now, so even still calling it Smallville is in error. Kara even goes public before Superman comes into existence so she’s not officially Supergirl. This show got so much lore wrong over time and it’s why I don’t look back on it fondly like some others do. By now the relationship has shifted from Clark/Lana to Clark/Lois, so that’s…close to getting something right. Also by season 10 they dropped Erica Durance in a bikini, but we still get a towel. Cheesecake Lois just feels wrong to me. Even “Slave Leia” has a narrative purpose.

Apparently the YouTube video editing community loves this intro. While looking these up I saw intros for the fictional and comic version of an 11th season, and fake intros for other shows, some real and some based on superhero movies, with the same visual style (and I’m guessing still using “Save Me” as the theme). Imagine how hyped you’d be for an episode if Superman & Lois started with this:

Welling would return to the role during the “Arrowverse”‘s take on Crisis On Infinite Earths, and not surprising that version of Superman gave up his powers, because I’m not convinced he actually wanted to play Superman. He just wanted to play a guy with powers who fought paranormal threats while hiding his powers and attempting to woo his dream girl. That was fine for a few seasons but at some point you need to actually become Superman. Although to the show’s credit, unlike Man Of Steel, Clark was at least stealthily using his powers to protect people and with the support of his parents. Over time some of his friends would learn his secret and also serve as a support team, while Green Arrow kept trying to get Clark to cross that line and go official superhero–that last part being where it fails for me. Smallville was a well-made show and I don’t want to take anything away from that, but it falls short of being a good Superman adaptation.

This will also be our last look at live-action Superman in this series. Krypton, Supergirl, and Superman & Lois don’t do intros. They just have a title card. Next time we’ll start looking at the remaining animated Superman shows. I haven’t calculated yet if they’ll all fit here but they just might and next time could be our last installment. A beloved canine returns, the most beloved of the animated Superman series returns, and young Superman goes time-traveling. Unless I forgot one this might be the last installment.