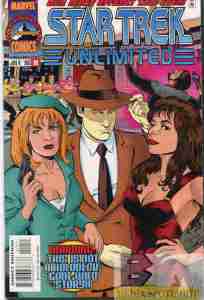 When you have to tell the audience this isn’t another holodeck malfunction story, maybe you’ve overused the gimmick?

“A Piece Of Reaction”

Enterprise-E investigates a subspace signal from Sigma Iotia II (from the original series episode “A Piece Of The Action”, which is where Jake & Leon‘s resident alien Fizzbin gets her name from), which the planet shouldn’t be ready for. (I guess Kirk didn’t mention that McCoy accidentally left his communicator behind.) Now the planet is imitating 23rd century Federation garb, but the division from the mobster days continues between gold shirts, blue shirts, and red shirts. (Bet we know who’s losing this one.) Admiral Sonny, the boy Kirk and Spock received help from, now wants that “piece of the action” he was promised and decides it will be the newest Enterprise. Tricking Picard and the away team Sonny manages to sneak a team onboard to seize the ship, but with their knowledge a bit out of date, like not knowing what androids or holodecks are, the crew manages to regain control, Sonny’s failing heart leading to him passing.

What they got right: It’s nice that this sequel to a previous story doesn’t feel like a retread. While part of my wouldn’t mind seeing what the other two factions are up to, from a critical perspective that would actually dilute the story. The fact that we know they combined their old mobster perspectives (the Iotians being an imitative species and the ship that visited before Kirk left a mobster book behind) with classic Federation perspectives makes for a unique adventure, while still using a small bit from the first story to boost this one.

What they got wrong: The scene where some random woman wants to use Picard to learn about the men on the ship because of Kirk’s reputation and…well let’s just say I’m convinced she’s earned one of her own, but her bit seems to be shoved in just to play on Kirk’s overinflated (by writers after the show if you kept a counter) libido.

What I think overall: This is one of the better stories in which New Trek (at the time) played with ideas from old Trek in different ways. It’s worth checking out.