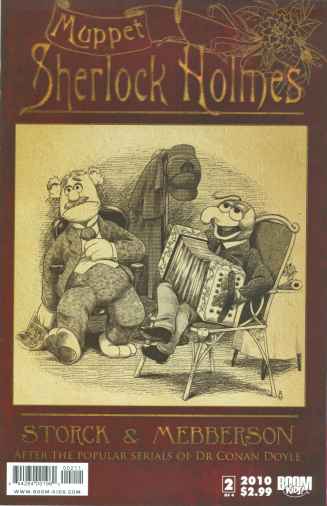 "Stick with the violin, Holmes."

Holmes, Watson, and Lestrade go undercover when a duke (Link Hogthrob) is being blackmailed by Miss Irene Adler (Miss Piggy). However, she figures out their ruse (such as it is) and decides to become their cleaning lady. Maybe if I read the actual book…

What they got right: In the Muppet world of Sherlock Holmes, Scotland Yard uses sketch monkeys as spy cameras. Are you sold yet? How about Storck writes a great parody and with BW’s favorite Muppet artist, Amy Mebberson, doing what she does best, how can I complain about this comic?

What they got wrong: You don’t listen very well, do you?

Recommendation: You have money. They have an awesome comic. Do the math.

Because I'm easily won over by TARDIS humor.

I even highlighted the important part, just to be sure you catch it.

Tomorrow’s Comic> Transformers: Drift #4, the final issue of the miniseries.