That's going to put a kink in their relationship.

Sally has been transformed into a robot under Eggman’s control. The good news is that the Chaos Emerald that powered the Death Egg has disappeared. Eggman unleashes a giant Metal Sonic to attack New Mobotropolis but it’s taken over by Ixis, although Bunnie is hurt in that battle. The Mobians thus accept Ixis as their new king.

In the backup story, Ixis comes out of the “Genesis” effect with the three beings that make him up now open in his mind.

What they got right: I did like the running gag about Eggman wanting to come up with a better name for “Mecha Sally”. Otherwise it’s the same quality art and storytelling that the title usually has. Going back to Ixis’ origins and using that to make him more than the magical version of Eggman/Robotnik has potential.

What they got wrong: I’m wondering if there isn’t too much going on at once. You have Eggman’s threat, Sally’s roboticization (which shouldn’t be possible thanks to how it was reversed long ago, but I guess they’re going to blame the Chaos emerald), and Ixis as ruler of New Mobotropolis. Seems a bit much all at once.

Recommendation: I’m curious to see where this is going, and this may be a good jump-on point for new or returning readers. 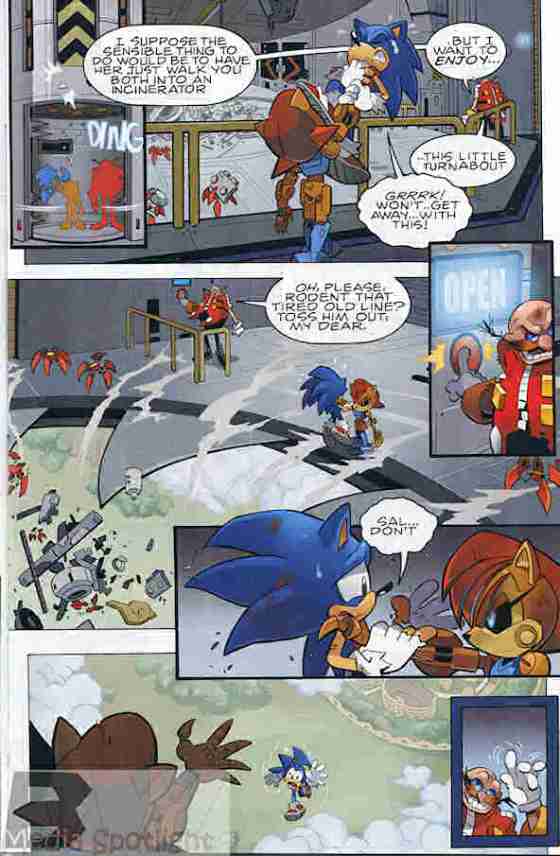 It's Eggman's response in the last panel that makes the moment.