Free Comic Inside: The Origin Of She-Ra

In our last installment we saw the original origin of He-Man and Skeletor. For this edition I decided to look at the sister series. In the cartoons Etheria is the flip side of Eternia. Where Eternia is ruled by a gentile ruler and guarded by a mighty hero, Etheria is ruled by a vicious tyrant and the might heroine is working with others to free the planet from Hordak. This is a memo that the advertisers apparently didn’t get.

I’m not sure if I saw all the toy ads, but this is one of two that actually has She-Ra battling anyone. From the few Princess of Power mini-comics I’ve read they weren’t much better. Now I realize that these were meant for girls, but they were meant for girls who like the He-Man cartoon but wanted more than three female characters to play with. This was their version of Masters of the Universe. Instead it looked more like Barbie as a fantasy story. In fact only two comics mention the Evil Horde (created as a third faction in the MOTU line but adapted by Filmation into She-Ra’s enemy). So how different is her origin from that of her cartoon counterpart?

Right from the cover we’re off to a bad start.

Images are again taken from He-Man.org if you want to see the comic yourself.

The story starts similar to the movie. The Sorceress is having a nightmare about a baby being kidnapped by Hordak. She is awakened by the Sword of Protection (although this appears to be an illusion and not the actual sword) which leads her to a secret portal. Sorceress calls He-Man to investigate and find the missing child, now an adult, but doesn’t tell him who she really is.

From here things are different. Adora and Spirit are on the run from Catra and hide in the safety of the Crystal Castle. We’re told that both carry magic shields, and that’s pretty much all we learn before Catra starts doing some serious damage to the castle. Adora transforms into She-Ra using the real Sword of Protection and heads out to face her. Catra appears to be winning until He-Man drops in and accidentally knocks Catra’s magic shield from her hand. She-Ra assumes He-Man is in league with her…for some reason…and attacks them both until the Swords of Power and Protection react to each other, causing Catra to run off. The Sorceress then appears in She-Ra’s shield and appears to use it to appear before them (this could be an illusion but that’s not clear) and tells them who Adora/She-Ra is. This is where the story ends. 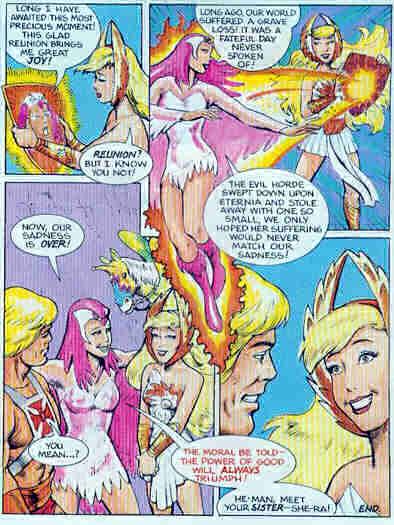 He was calling her “pretty lady” a little while earlier. I wonder if Marlena ever told Adam about the movie Star Wars?

That’s really all that happens and it leaves a lot of questions behind. How did Adora get her magic sword and how does she know the incantation to call forth the transformation? She’s referred to as if she is the princess of the Crystal Castle. When does this happen? Does she maintain a secret identity like Adam/He-Man does? None of this is ever explained unless one of the later comics follows that path.

The art is serviceable but it’s easy to tell that Mattel didn’t take the same attention to detail with this comic as they did with her brother’s, and I’ve seen a few others to confirm this. Only one other comic deals with the Evil Horde while the rest of the mini-comics I’ve read seem to ignore any connection to Masters of the Universe, and not in the “this is her world and her story” way. Obviously in mini-comics continuity Hordak and his lieutenants are on Eternia causing trouble for all sides involved, but did they leave no presence on Etheria? Are they not in charge if Adora is a princess here? These are questions that go unanswered.

These may be OK comics to read just to see what they did with the Princess of Power line but that’s all they are; a curiosity with no real substance. More She-Ra stories are sure to pop up here in the future but don’t expect a lot from them.

Posted by ShadowWing Tronix on August 16, 2012 in Free Comic Inside and tagged Crystal Castle, Eternia, Etheria, Masters of the Universe, Mattel, Princess of Power, She-Ra.