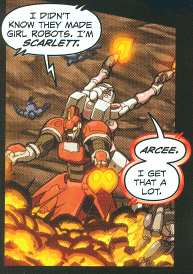 In the original Transformers episode “The Search for Alpha Trion“, we were introduced to the concept of female Autobots, which led to Arcee, a character that appeared in the movie and season 3. Female Autobots later showed up in Japan-exclusive episodes and shows. Sure, the comics seem to be going out of their way to deny this. Look what Furman did to Arcee in the IDW G1verse. And yet, as we saw earlier today, they can get drunk. I don’t understand the comics. And I never understood Simon Furman.

But what about female Decepticons. In Beast Wars, Blackarachnia was the first female Predacon, but she was a Maximal originally. She came back as a Decepticon for Animated and you have Airachnid in the current Transformers Prime. You might think the first actual Decepticon fembot was Thunderblast from the lackluster Transformers: Cybertron. Thankfully no, as she was just an annoying character. Actually, the first female Con didn’t come from the shows. She came from a Japanese comic. Manga. Whatever.

I don’t know if I mentioned this or not but BW Media Spotlight is not my first website. Back when I was a regular member of the alt.toys.transformers. newsgroup, and before I added “Tronix” to my screen name, I also had a Transformers fansite called The Transformation Zone, a site supposedly dedicated to “Transformology”, a study of the art of transforming. That…pretty much went nowhere. I had considered bringing it back but the host had very little storage space, and it included the text in the size limits. It was so small that I couldn’t fit the WordPress software. Compare that to my two sites today where we have no text limits and gigabytes of media space. I’ve also learned that the term “transformation zone” is actually used in discussing cancer so if I ever did make another Transformers fansite I’d need a new name. By the way the server was shut down so the site no longer exists.

Well, at the time, fellow Transfan and comic editor Doug Dlin had translated two pages from the manga version of Transformers Victory, the third Japan-exclusive “G1” series. In these two pages which I bring over from the old Transformers site we see not only the first female Decepticons but Decepticon kids. I don’t think we’ve ever seen Autobot kids, although now we have the protoform process. Remember, this was done right to left, as they read it in Japan. I messed up the flipped version I also had on the old site, but this will make the otaku happy. 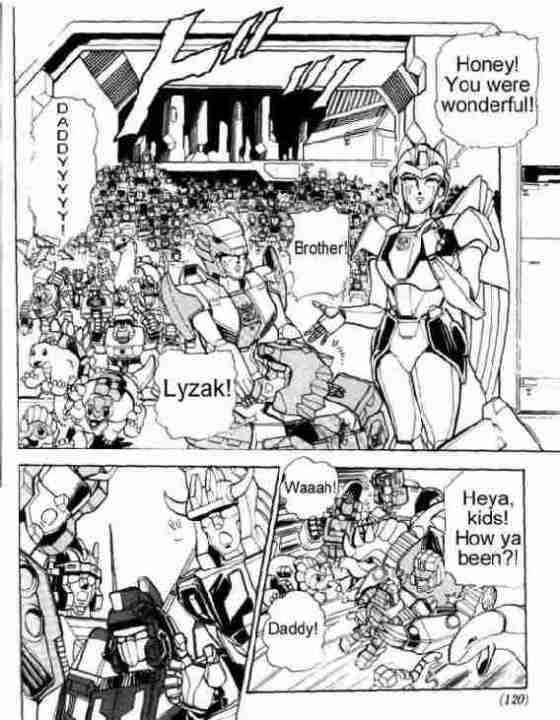 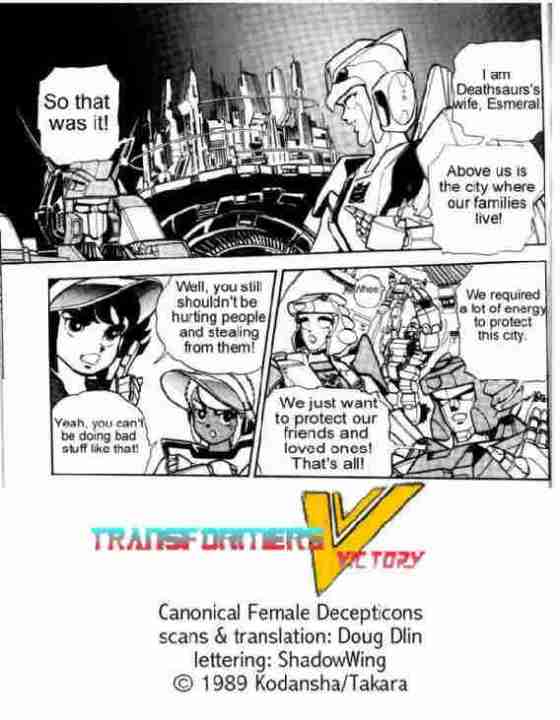 Personally, the idea that the Decepticons were only trying to fuel their family is kind of weird. Still, I give then credit for actually DOING something with the idea of female Transformers instead of wimping out like Simon Furman has done with Arcee. Oh, we’ll get into that someday. You know, I’d like to read the full story someday and see what happened. I wonder if IDW or Viz would consider giving the manga a full translation.  My lettering has improved since I first lettered this.