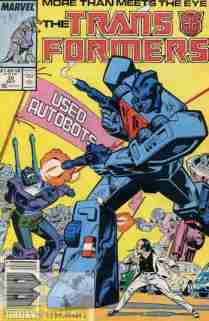 This is how TJOmega’s annual collection purge goes.

Escaping both Vortex and RATT, Goldbug, Blaster, and the Throttlebots hide at a used car lot. Unfortunately, the dealer is as stereotyped as you can get, and plans to turn them over to RATT. Doing so, however, will have to be done undercover as Blaster and the Protectobots battle the Combaticons. But the Protectobots didn’t come to help their fellow Autobots, but to arrest them on Grimlock’s orders!

What they got right: RAAT’s learning. Even Barnett ends up questioning the two groups actually hating each other. While what happens to our heroes on their road trip is bad, there’s no “reset button” on it.

What they got wrong: The Throttlebots seem to know a bit too much about RATT and the Autobot’s team-up with GB.

Other notes: This shows off more of my problems with Grimlock’s reign. He complains about humans getting in the way when they fight Decepticons…but he didn’t fight a single Decepticon during his reign until near the end of it.

Recommendation: A good story, but one benefited if you’re up on current events in the comic.