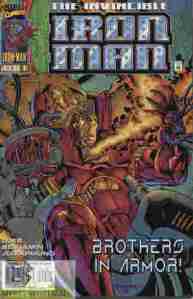 I don’t even want to know what happened here.

Iron Man takes Rebel to Reed since he has the equipment to examine and monitor their old friend’s cybernetic body. Tony uses his own armor’s power supply to power up Rebel’s cybernetics and taps into a psychic link to try and find who did this but also sees their lives through Rebel’s eyes, learning he challenged Russia’s Titanium Man, losing a girlfriend, but forced to stop just after learning of Madame Hydra. Rebel doesn’t have long left and he plans to go out fighting!

What they got right: It’s interesting to look into Tony’s past (even if it isn’t his real past) and seeing his friendship with Rebel and the two of them goofing with Von Doom.

What they got wrong: But really that’s all there is. There’s hardly anything about what happened to him and I guess we’re supposed to assume whatever happened to the armor in the fight with Titanium Man had an effect on the official test and led to the armor exploding. I think.

Recommendation: If for some reasons my reviews haven’t been chasing you away from the “Heroes Reborn” stories please know that even for them there’s really nothing here unless you, out of some form of masochism, want the full set.