Morning Article Link: Why Goyer Should Be Challenged 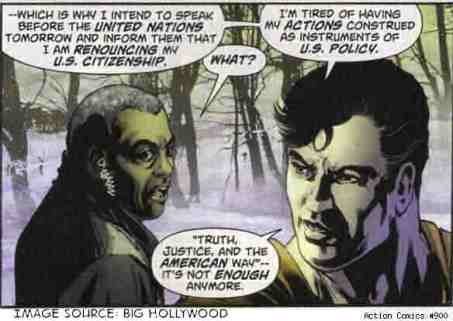 I decided after the last time one of the Man Of Steel creators tried to defend their version of Superman I wasn’t going to talk about these goofballs again. So when David S. Goyer (who also gave us the above dialog) showed how little he knows about She-Hulk or cared about the Martian Manhunter (and the fans who know who he is) I decided to ignore the idiot. DC keeps handing their shows and movies to people who hate comics while the direct-to-video animated films are mostly Geoff Johns stories, with the occasional Frank Miller or Grant Morrison tale thrown in.

However, Comics Alliance contributor Chris Sims makes a good case for why he should be challenged if we want to be taken seriously and have any hope of seeing the DC Universe we love so much make a comeback. I’m still done with angry ranting for a while. I’m kind of tired of it, and plenty of writers have made the same points I would anyway. Like Mr. Sims for example, so go read that.