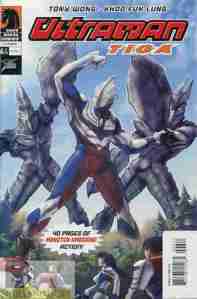 “Is this about that parking ticket?”

Tiga takes on the Regulan-Seijin, but he cannot do it alone. While Rena is still blaming herself her fellow GUTS teammates (minus Daigo, of course) join the battle, during which Daigo realizes his feelings for Rena but that she would be in trouble if she knew. Together, Tiga and GUTS destroy one of the invaders but the other manages to escape and seeks the aid of a more powerful alien who used to be the Regulan-Seijin’s previous victim. Now he’s decided that instead of reclaiming his world he’ll seek another prize…Earth!

What they got right: There’s some interesting character development with Daigo and Rena’s relationship that I hope gets some decent play in the next few issues (this is a 10 issue series, sadly). The action is incredible and kudos to Lung. He’s a great comic artist.

What they got wrong: How did the surviving alien get to wherever he is? Tiga blew up his ship!

Recommendation: Things are heating up, both for our heroes and for Daigo and Rena. Find these comics if you can.