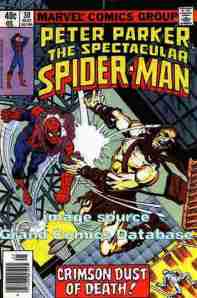 The winning team faces Firestorm in a game of Basketball.

Spider-Man and White Tiger (who is back in action against his sister’s wishes) are fighting Carrion and his underling, Darter somewhere around ESU. Carrion has a special hatred with Spidey while Tiger has his own score to settle with Carrion. Darter is supposed to keep White Tiger out of things but Carrion has to be the one to put Tiger out of action when his associate turns out to be no match for the hero. He brings a defeated Spider-Man to Warren’s lab to reveal how he knows so much of the situation with Gwen and Miles Warren…for he is Warren’s clone!

My fellow Friday Night Fighter, Brian Snell, has said more than once that any comic can be a jumping on point, not just one specially created to be. My experience with this comic would prove there are exceptions to that rule. I’ve mentioned in the past the first two DC Comics I’ve ever owned, Batman #307 and Justice League Of America #162. This was the third comic in that set and of the three this was the most confusing. The Batman comic was a stand alone story of Batman investigating the murder of homeless people and none of his rogues gallery was involved. Justice League Of America had a main story that I’ve brought up enough times in Friday Night Fights and a subplot where Zatanna, Elongated Man, and Red Tornado went looking for her missing father and piecing together more of her missing past that led into the next issue. The subplot made me interested in finding out what happened to this story even though it involved three characters who were never on Super Friends (my gateway into the DC Universe, as you recall).

This comic, however, was just confusing. Okay, so some professor blamed Spider-Man for the death of some girl named Gwen Stacy. Who was she? Why should I care? As far as I knew this was a continuation of a previous storyline but otherwise I had no idea who these people were, who this Carrion guy was, or even who the White Tiger was. This version of White Tiger as still never appeared outside of the comics. Darter had a cool costume that could use a better coloring scheme. Otherwise, I didn’t care about living clones, Gwen Stacy, Miles Warren, or this Carrion character outside of he wanted to kill Spider-Man. Only now that I know who Gwen and Warren are do I have the slightest interest and it still isn’t enough for me to want to get the previous and after issues of this storyline.

Otherwise, the art is good and maybe if I knew what was happening at the time I could get into this story. That said, every comic can’t cater to every person, and not every issue has the luxury of being open to everyone if the story doesn’t allow for it. At the time I had no way to look for comic or pick them up. This three-pack was a gift, I believe for my birthday. Were I able to get the next issue (which was probably lost gone from the shelves) I might have, but only because it was Spider-Man. Otherwise, I wouldn’t have bothered.

The art is good and I would need the surrounding issues to get a better feel for the story but what’s presented wasn’t bad. Just not the comic to start on.