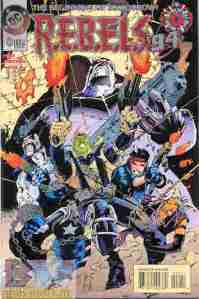 L.E.G.I.O.N. is the Licensed Extra-Governmental Interstellar Operatives Network, less SHIELD and more a private security firm for planets. I’m not sure how that connects to the Green Lantern Corps but at this point in the series Vril Dox, the founder and son of Brainiac (I thought Brainiac was a robot?), has lost his group to his evil toddler son, Lyrl Dox. Yes, the history of L.E.G.I.O.N. is brought up here as Lyrl alters facts (even though he’s brainwashing everyone anyway), but don’t think for a minute this makes any sense. It’s comics, people. Crazy has a residence here. Now Vril and his group are on the run and trying to survive, stealing from their former group, which bothers Strata. The others include Lobo, Stealth, Phase, and someone who doesn’t get named in this story as far as I can tell. The story ends with their ship, some strange vessel from the future they happened to find, is surrounded by their former allies.

I’m really trying to follow this but if any of that made sense to you then you’ve either been reading L.E.G.I.O.N. long before this or you’re a better person than I am. I mean, they try to explain what’s going on but that doesn’t mean it made a lot of sense to me. I couldn’t get into it then and I can’t get interested in it now. I know that makes for a pretty weak review but I can’t give you a proper opinion. The best I can do is that they surprisingly make a supersmart and superevil toddler threatening enough by his actions, and it does a good job explaining the important events, plus the art is good. I just can’t follow what’s going on. Plus Lobo’s a main character and I don’t like Lobo. Most people who write him didn’t get the joke, and he fits in too well with the 90s style.

I wish I could give you more, but this isn’t a comic I can recommend because I just don’t care about this book. Maybe it’s my taste or maybe it isn’t good, but I couldn’t tell you which.