October 25th, 2009 was the debut of Jake & Leon, the result of me messing with drawing and needing to open my Sunday comic reviews. When the reviews went daily I tried a collection of articles, and when that was also time-consuming the comic took over Sunday completely, with an update of what’s planned for the week. This is the ninth year I’ve been doing this comic. The art has gotten better since then, but the jokes really haven’t. 🙂

For those of you new, Jake & Leon stars the title character–cartoonist Jake and his best friend Leon–hosting a skit show and sometimes doing skits themselves. In time they were joined by stage director Bill, his wife Meredith the set designer, their daughter Beth, Jake’s art buddy and marketing misfit Max, and Fizzbin the alien from planet France. The skits are sometimes done in alternate styles, with Jake, Leon, and the others commenting on the dumb ideas the entertainment industry often employs or just having fun with some trope or silliness.

A day late, but as the anniversary of the comic I’m going over this year’s offerings to find my favorites of the comics I’ve created. I hope they’re some of yours too, or at least that you find it amusing. 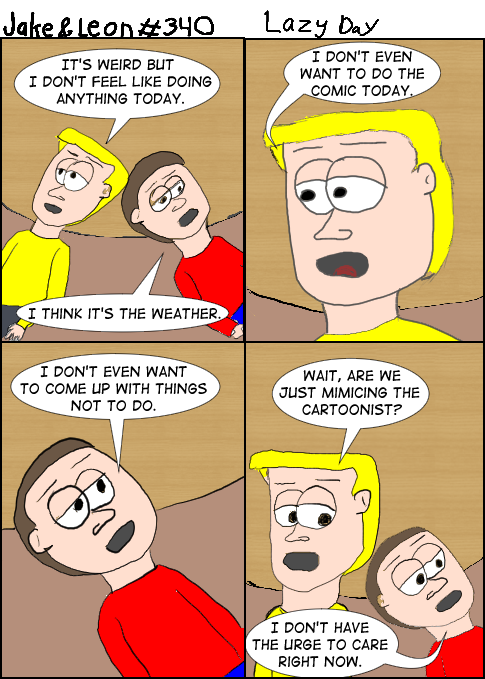 I don’t even care to caption this.

If I can’t come up with something I try to at least make a joke about not being able to think of something. I guess it was just a bad day.

I don’t celebrate until I see the changes.

This is actually strip #342. I messed up the numbering. So, one year later and Cebulski’s Marvel has not gotten better. It may actually have gotten worse.

Between Jake & Leon and Captain Yuletide I need to conserve.

Sometimes I just need to make a dumb joke. 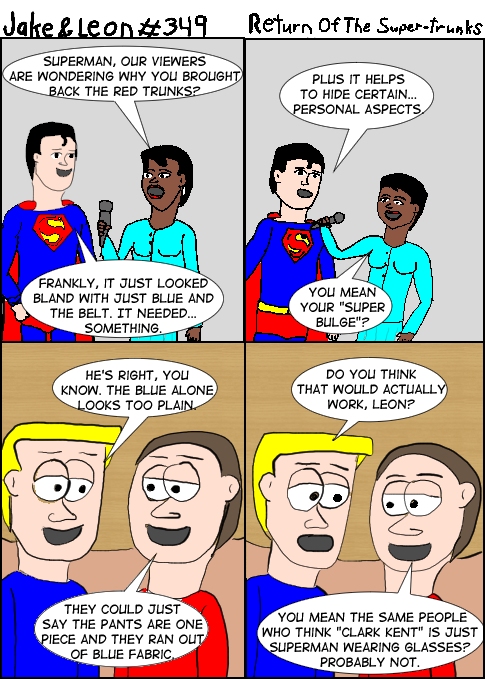 Not to mention believing “Man Of Steel, Woman Of Kleenex” is canon.

To the cool kids who thought the trunks look like he’s wearing his underwear outside his clothes, no red area meant it looked like he was wearing a onesie. It was boring and looked bland. A simple belt wasn’t enough. I like my solution but I’m just happy the trunks are back. Now if Bendis wasn’t.

I believe the score is three good, two evil. Four good if you count pocket dimension Superboy as separate from classic Superboy.

Once again I paid homage to the “Super Cafe” from How It Should Have Ended. And given this was 2000s/Young Justice Conner putting him in Batman’s spot is appropriate. I wonder if it’s clear that’s classic “Superman as a boy” Superboy in Superman’s spot?

I just liked the commentary.

Shouldn’t we be living by the good examples others set anyway?

This was around the time that the first reports of widespread sexual assault and molestation were coming out, Channel Awesome was shown to be run horribly and chased off most of their contributors, and the awful truth about JewWario came out, plus bad stuff happening in comics. It was a tough moment and I’d seen people not wanting to do things they loved after hearing those who inspired them turned out to be less than decent people. So I put this together to remind people that what we thought our heroes were and what inspired us shouldn’t change just because they did, or at least revealed their true colors. Don’t base your dreams too much on the actions of others.

Yes, tell me again how unrelatable Superman is because he’s so powerful.

I hate Wolverine. The writers just try too hard to make him a badass and any character growth is tossed out to regress him to being violent and angry. And they keep making him way too powerful, but tell me how Superman is too powerful despite it making sense for him to be powerful.

Actually the fact that taking my life meant so little to them would make me feel worse, not better.

Hitmen and henchmen in fiction are a curious lot.

Counting the Bat FAMILY, he on like three different teams right now.

Tom King seems to be one of those writers who enjoys torturing characters and too many writers make Batman borderline insane (or fully insane if you’re Frank Miller) or the brooding loner who is on many teams (no wonder Amalgam merged him with Wolverine). I don’t like these approaches. Batman’s victories come from training, detective work, a psychological edge, and being the hero of the story, not from his pain. Pain is not something you want to have. Trust me.

At this point even Max’s bad expectations are too high.

It’s nice to discuss an accomplishment rather than another failure for once. At the time this site hit 202 subscribers and now I’m at 214 as I write this. I’m glad that many people found something interesting enough to stick around and I hope at least once a week if not more often you all get something that interests you.

Not since the days of Woodsy and that Tootsie Pop owl have they appeared in this many commercials.

And that’s some of my favorite creations this year. Now we head into year nine, depending on what life throws at me next. It may not be groundbreaking or the best webcomic ever but I have fun making it, and I think that’s what counts considering I don’t make any money on this stuff. Plus I get some practice in and if any comic I do entertains someone, even better. Here’s to year nine.