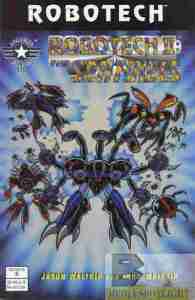 Guys, stop ruining your reveal on your own cover!

In his anger the Regent orders his forces to attack the image of Zor, and if you’ve been following along you can guess how badly that goes. The Regent and his Invid flee the planet rather than get smashed. As the Sentinels hold a funeral for Sarna the Zentraedi and their new REF allies arrive on the planet and they form a two-pronged attack. One group, including Vince and Wolfe, will return to Tirol to attempt to reign in Edwards while the rest continue to the next world they plan to liberate from the Invid. Tesla also tries to make a case for his freedom and help in replacing the Regent with himself. One victory is scored on Tirol as Dr. Lang gets the SDF-7 sent to Earth to hopefully warn them about the Robotech Masters in time (those of us who are fans of the show know how wrong that ends), limiting Edwards’ power. He is still torturing Minmei for information about the pilot, which Nicks attempts to confirm the location of. Instead she unknowingly comes across the pilot, pretending to be a street beggar, and leads him to a nearby shelter. On Optera, the Regent prepares his new army, the Black Death Destroyers, to attack the Sentinels.

What they got right: I do love the design of the Black Death Destroyers. They look very menacing, the usual Invid mecha but a hint of the Inorganics. The conclusion to this story arc and the set-up to the next one are both handled well. Too bad we won’t see the full results of that since the series is almost over.

What they got wrong: Outside of spoiling the big reveal of the Black Death Destroyers on the cover (like they did with Janice’s robot reveal on a previous cover) and one panel where they still get the word balloon order confused, no big complaints. I do have a minor one though. Tesla assumes that the Regent will immediately be his wife if he replaces the Regent as the leader of the Invid and I’m not sure that’s how marriage works, though this is an alien culture. It doesn’t matter since she buggered out for Earth.

Recommendation: Another good issue. I wish they’d get the Waltrips to finish this series but I guess that’s a lost opportunity by now. Still recommend checking this series out.