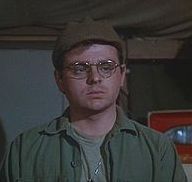 On the first episode of M*A*S*H, the series based on the movie that loosely adapted the novel, a joke was made that was revisited on the final RECORDED episode, according to this article. While MeTV’s article on this says the joke was intentionally playing the long game it’s also possible that they remember the gag and revisited it or the line in the final scene shot for the show (the final season wasn’t recorded in order so “Goodbye, Farewell, And Amen” was the last aired episode but the last scene shot was from “As Time Goes By”, the previous airing episode) was a coincidence. Unless they always planned for the subject to air in their final season (and as I’ve written before the tone kind of changed partway through the series) I’m betting it’s either luck or remembering an old gag.

Posted by ShadowWing Tronix on September 28, 2020 in Television Spotlight and tagged M*A*S*H, trivia.