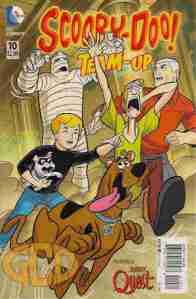 Which dog has seen more mummies, Scooby or Bandit?

Mystery Incorporated are hired to look after a ruby that’s supposed to come with a curse, but that also brings Team Quest in. That was Doctor Zin’s plan, to not only get a ruby he can use for his death ray but capture Doctor Quest. Our heroes journey to Zin’s “Island Of Monsters” to rescue him, hijinks ensues with the robotic and genetically created monsters, and it ends up that Shaggy and Scooby end up capturing Zin while the others rescue Dr. Quest.

What they got right: The story was fun. There’s some interesting compare and contrast with the kinds of mysteries both groups run into and how they deal with them.

What they got wrong: It’s too bad Jessie couldn’t be in this one but with this large a cast she wouldn’t have gotten to do much anyway. And by now you know my main complaint about DC’s Scooby run. We do get to see the group use their brains but I still want to be able to join in.

Recommendation: What it lacks in mystery solving it makes up for in a fun little team-up story. Worth taking a look at.