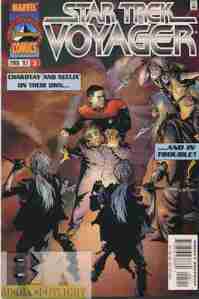 Of course Chakotay and Neelix are in trouble. It’s happened every story arc in this comic series.

Actually the natives rescue Chaokotay and Neelix. They make a deal to allow the crew to mine the materials they need but will not abandon their planet. Instead Kes finds a solution to the plague while Tom comes up with a crazy plan to beam the stuff they need to repair the phasers and send the Kazon packing.

What they got right: The ending works well enough. The plants coming up with their own resistance to the plague was a nice idea and still needed Kes’s help to speed things up. The action was okay.

What they got wrong: The mining and repairs seemed to go a bit too fast to be believable, even for this series.

Recommendation: I don’t just think it was all the nonsense going on for me the past few weeks that makes this story feel like a bit of a letdown. It’s not one really worth pursuing.