What started as some fun art practice turned into an opener for weekly comic reviews, then when the reviews went daily the opener for links to other articles–and then THOSE went daily, so I just gave the Sundays to Jake & Leon. The comic is sometimes extra commentary, sometimes fun parody, and sometimes just me goofing around and playing with drawing. We’re entering the 13th year of the comic, which is still amazing for me despite not being my dream project and with all the medical interruptions the past few years. I’ve seen my talent grow, shifting from paper to pixel, and just doing something fun. I even got to make a new logo this year for the 500th strip, and the fact there WAS a 500th strip was a feat in itself, not only because of what 2021 did to me but that I managed to keep interested in it that long.

As per usual, it’s time to look back at the previous year. Despite operations (again) and other sick leave problems I think I managed to produce enough strips this year to have some favorites. So let’s look through the adventures and commentaries of Jake, Leon, Max, Bill, Meredith, Beth, and Fizzbin and find the comics I’m most proud of this past year’s time. Some win for something I did making it, some for the gags, and some just because even now I really liked it.

Alternate title: Scrappy-Doo and Guess Who.

After hearing that James Gunn personally added his hatred of Scrappy-Doo to the live-action movie by making him the villain, I as a Scrappy fan had to get that in. Sometimes I just really enjoy making this comic for the wrong reasons.

Well, they got their one minimum in.

I’m worried I’m going to have technical issues in this year’s Art Soundoff as well, but getting to play with a few different styles is one of the reasons I do this comic. Some I don’t get to play with so I’m glad I had an opening in this one.

Also, looking at the series I did that December where Jake is asking everyone what they hope for in 2021 makes me sad. They all hoped 2021 would be better than 2020 but for me personally it wasn’t. Turns out the bar was higher than I thought. 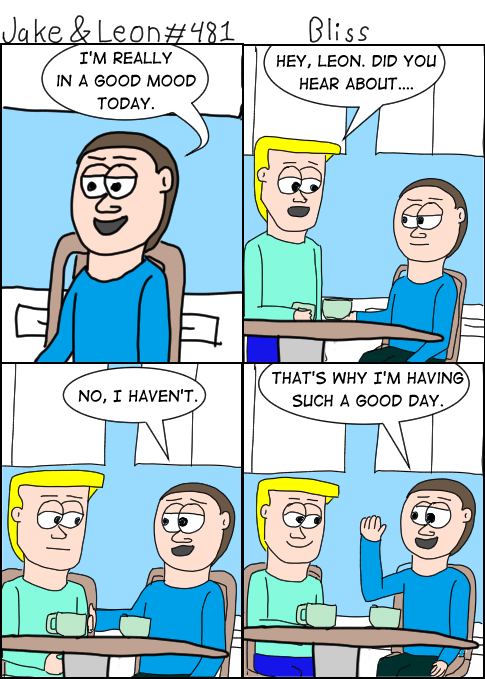 I’d say ignorance is bliss but that’s usually how they trick you. However, not watching the news has its benefits.

A good message given the current state of the internet.

“Not that I was supposed to, but you didn’t take Mrs. Green’s math class.”

I just liked the joke.

Do we not remember Jen only got her gamma radiation from a blood transfusion and not a large gamma bomb?

Sadly they seem to be getting worse about this rather than better. It’s funny seeing people talk about “masculine” not being the ideal when they’re drawing women as masculine as they can. See also Masters Of The Universe: Revelations. Like Leon said, a quick search of actual fit, muscular women will show you what they’re doing wrong.

These next two are a few weeks apart, and then I found a third while continuing to go over this year’s strips. See if you can spot the narrative screw-up I did here.

Nonexistence does tend to interfere with the creative process.

To make it worse, his apartment building is across the street.

For someone who complains about lore inconsistency I can only blame how sick I was this winter. Remember: A reason is not an excuse, but I still should have known better. 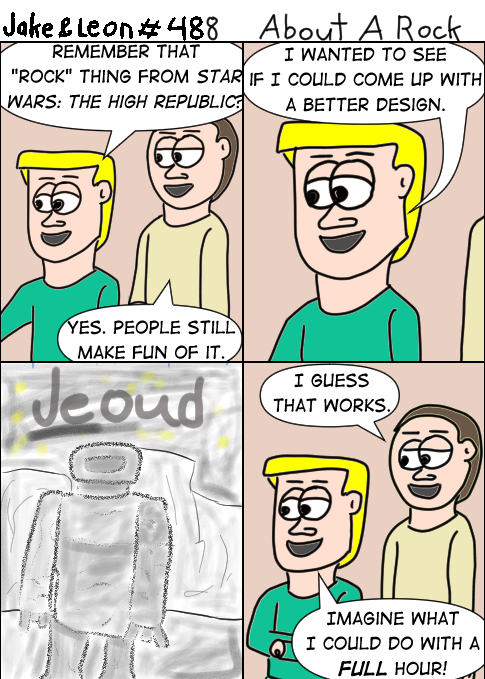 One of the inspirations for Star Wars were old movie serials, and, yes, there were rock monsters. I looked that up in like 10 minutes.

When even I have a better idea, and yes that really did take me around a half hour to come up with–and some of that was research, maybe question how creative your creators actually are.

I guess older Jon needed a GPS to his home dimension.

I’m still available to flesh this idea out, DC Comics. Check my contact page for how to reach me.

I won’t be holding my breath waiting. 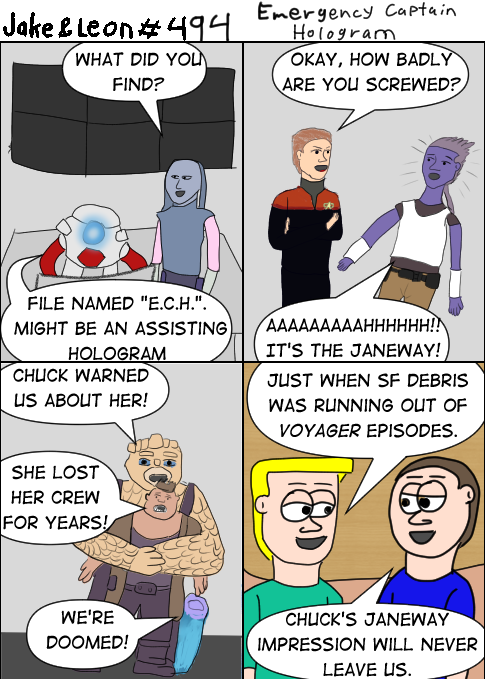 At least it isn’t Neelix coming back.

Even now we don’t have a very huge look at this series, but I’m just waiting to see what SF Debris is going to do with holo-Janeway. It’s bound to be funnier than what I came up with. Trying to translate this style into mine wasn’t easy but all I had to go on for the kids was a teaser poster.

Yeah, I heard he reformed or something but would this have worked with The Plutonian?

What’s the sense of making a commentary/parody skit comic if I can’t be a bit cathartic at times, if only to myself? 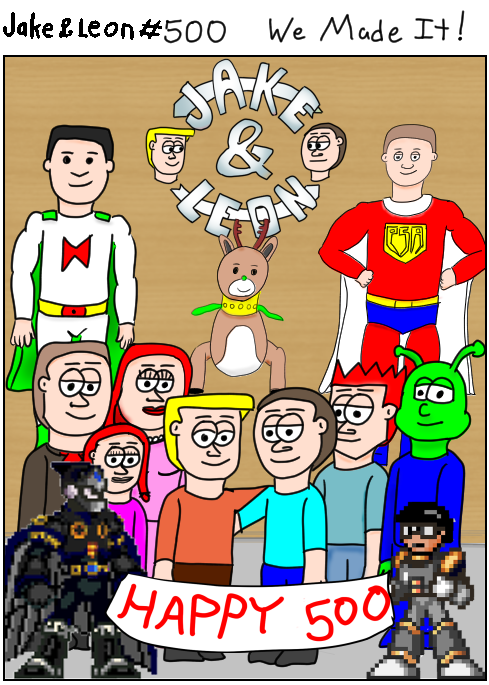 I actually made it to 13 years AND 500 strips. If I hadn’t gotten sick the 500 count would have been hit sooner, but I wasn’t so lucky. Also slipped in a tribute to my failed sprite comic as I charted my online comic history.

Still, at least I managed to get some good comics out this year. With any luck or act of God year 13 will not be the bad luck stereotype and I can actually get things going. I’m just not tempting fate again.